Odell Beckham Jr. Tried to Start a Brawl in the Middle of a Football Game

The Giants phenom had a terrible, horrible, no good, very bad day. 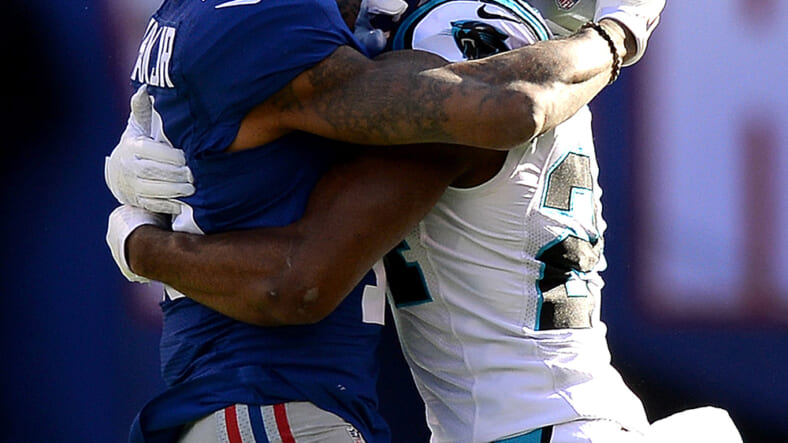 The Giants and Panthers played a football game in New Jersey on Sunday, but Odell Beckham Jr. thought it was a street fight.

The Giants’ phenomenal wideout was an uncontrollable ball of rage in the 38-35 Panthers win, racking up three unsportsmanlike conduct penalties and likely earning himself a suspension. His coaches did little to calm him, the refs did nothing to stop him and the Panthers, who were fighting to stay undefeated on the season, kept egging him on.

Beckham’s main adversary on the day was Panther’s corner Josh Norman, perhaps the best cover man in the league, who planted Beckham on his ass after a long hug early in day. If you’re looking to excuse what came next from OBJ, you could argue that Norman started it all with this “bodyslam,” but you’d be wrong. This kind of thing happens all the time in the NFL and rarely turns a guy from Bruce Banner into the Hulk.

Beckham first retaliated with a headbutt and some wrestling— not all that controversial either.

At this point, it was obvious that the Panthers were just trying to get into Beckham’s head — and it was working. Beckham was far more interested in retaliating than in catching the football. He didn’t even make his first catch until nearly 40 minutes into the game. Shortly after that three-yard gain came the play that will likely cost Beckham some money.

With Giants running back Shane Vareen going down after an 18-year run, Beckham lined up Norman and went after his head like a cruise missile. The resulting play drew a flag for unnecessary roughness and should have gotten Beckham booted from the game.

He stayed in, though, and should be grateful that Norman wasn’t seriously injured on the play. Beckham went on to catch the game-tying touchdown pass, which he celebrated by channeling Allen Iverson. It still wasn’t enough: The Panthers came back and won on a field goal.

So along with losing their best player, who’s a lock to be suspended, the Giants lost the game and all hopes of sneaking into the playoffs without the help of a Christmas miracle.