This is not your Dad’s metal band—except maybe it kind of is. 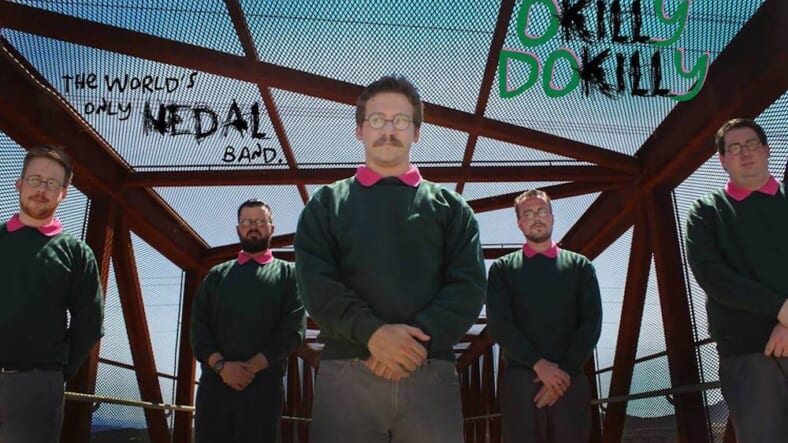 Metal is full of brooding rockers with inspired facial hair who make interesting wardrobe choices. But that’s where the connection between, say,  Hatebreed, and The Simpsons-inspired metal band Okilly Dokilly ends.

Okilly Dokilly, based in Phoenix, Arizona, is five mustachioed dudes in full-blown Ned Flanders regalia. And they are here to rockilly-dockilly your face off. Lead singer Head Ned tells Aussie music blog Rip It Up about the band’s fiery genesis in the blood-soaked aisles of a neighborly grocery store:

“Myself and our drummer (Bled Ned) were in line at a grocery store, entertaining ourselves by coming up with really cutesy names for really hardcore, brutal bands,” he says.

“The name Okilly Dokilly came up and was very funny to us,” he says.”We ran with it. I contacted a few friends (Red Ned, Thread Ned and Stead Ned), and here we are. Most of us have played in other bands around our hometown,” he explains. “This is definitely the heaviest sounding project any of us Neds have done.”

The band has carved out a green and purple niche within Metal’s black and blood red Valhalla they’ve dubbed “Nedal,” and say that they take their lyrics from the man himself (their lyrics are often direct quotes from Ned Flanders).

Their sound, sampled on their Bandcamp page, is solid, formulaic metal, with soft, almost classically-voiced verses slashed by the requisite screaming choruses. Let’s just say Homer Simpson might think twice about calling them “Stupid Flanders(es)” after hearing it.

Okilly Dokilly perform live in Phoenix for the first time on September 5th, but probably not before having a warm glass of milk and pre-show prayer.