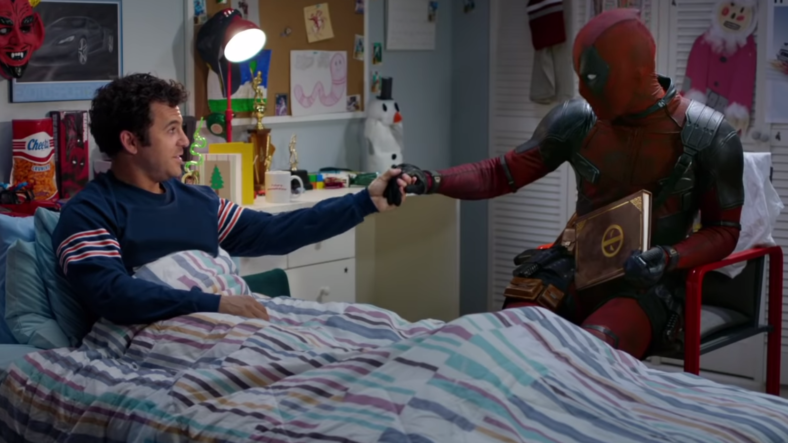 Future DVD and Blu-Ray versions of Deadpool, Deadpool 2, and Once Upon a Deadpool should carry a special section featuring just the trailers, because they’re often hilarious. Ryan Reynolds dropped a new trailer in a tweet Monday morning, and it’s one of the funniest yet. It’s also a stirring defense of Canada’s beloved corporate rockers, Nickelback.

Bed-bound Fred Savage is no fan, and in the trailer he says “They’re over-produced, formulaic ear garbage.” Ryan Reynolds, a Canadian, makes it clear that the Merc with a Mouth is definitely in Nickelback’s corner.

“50 million albums worldwide,” he says to the camera, “11th best-selling musical act of all time, Billboard’s most successful rock group of the last decade…” He goes on, listing all the band’s awards. When he’s done, Savage is a changed man.

He apologizes, then the pair sing Nickelback‘s “This Is How You Remind Me” while holding hands. It’s a heartwarming, Christmas-y moment indeed.

A reminder of what’s up with Once Upon a Deadpool: It’s a kid-friendly edit of Deadpool 2. Here’s the sequel’s synopsis:

Wisecracking mercenary Deadpool meets Russell, an angry teenage mutant who lives at an orphanage. When Russell becomes the target of Cable — a genetically enhanced soldier from the future — Deadpool realizes that he’ll need some help saving the boy from such a superior enemy. He soon joins forces with Bedlam, Shatterstar, Domino and other powerful mutants to protect young Russell from Cable and his advanced weaponry.

The new version isn’t just an effort to rake in extra millions in the box office. Each ticket sold will contribute $1 to “Fudge Cancer”—the kid-friendly name for “Fuck Cancer,” an organization dedicated to prevention and early detection of cancer, as well as support for those already suffering from the disease.

So the kids get to see a cleaned-up Deadpool 2 and everyone contributes to a great cause.

Sounds like a perfect reason to head to the theaters when Once Upon a Deadpool premieres Dec. 12.