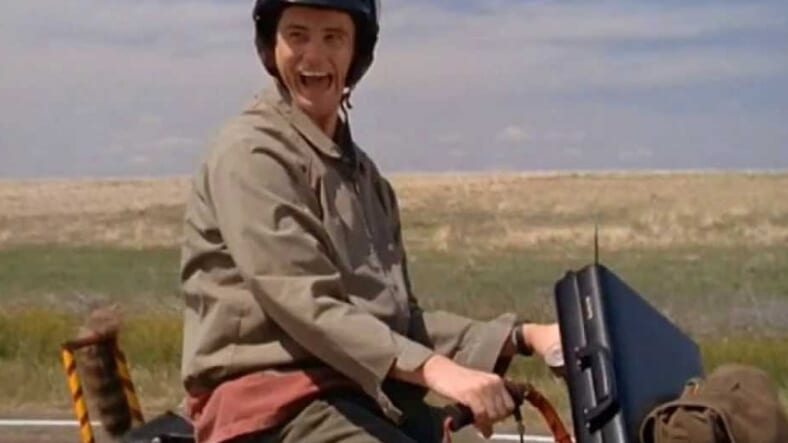 If you’ve ever wanted to ride to Aspen, Colorado on a real two-wheeled speed demon, this eBay auction may be for you.

That’s right. About a year ago a guy acquired one of the two original mini bikes (scooters, mopeds, whatever) used by Jim Carrey and Jeff Daniels as their blissfully dim-witted characters in Dumb & Dumber. He made it road-worthy, and for just over $9000 this piece of stupid Hollywood history can be yours.

Current owner TommyB211 lives in Houston, Texas. He gives a bit of the bike’s behind-the-scenes history in his listing:

This one of only two existing mini bikes that were made for the original classic comedy Dumb and Dumber back in 1994 by the now late Sydney J. Barholomew(also designed the Mutt Cutt’s Van, bicycle set for Pee Wee’s Playhouse, etc).
the two original bikes – one was gifted to Planet Hollywood, and this one was given to the transportation coordinator from the film(Gordie Merrick) by the Farrelly Brothers.

The seller purchased the bike from Merrick, who’d just shoved it in the back of his garage or something. Then TommyB211 spent the better part of 2017 lovingly returning the putt-putting prop to Dumb & Dumber road standard condition.

The seller will include the bag, briefcase, and helmet, but he admits they aren’t original props. They do go with the bike regardless.

Best of all, perhaps, he says it’s “in good running order now, but has not been ridden.”

That’s the best part. The riding will be up to you, the buyer.

Actually, no. The best part is proceeds from the bike will assist the seller’s son in paying college tuition, and a portion will be donated to the Best Friends Animal Society.

Buy a piece of movie history and save some dogs at the same time. That’s a hell of a bargain.

The greatest hog to ever carry two of moviedom’s favorite idiots will be on sale through February 18.