The most bizarre moment in Oscars history spawned a sh*tload of hilarious tweets. 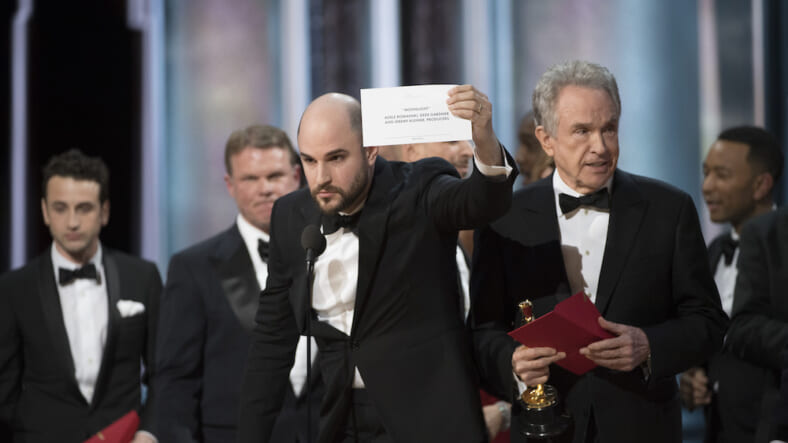 Last night’s Oscars had hummed along smoothly until a truly bizarre and unprecedented finale: La La Land was erroneously awarded Best Picture before stagehands rushed in to let everyone know that Moonlight was the true winner.

Regrettably, it all went down after the producers of La La Land had begun their acceptance speeches, before being forced off the stage.

It seems that someone handed presenters Warren Beatty and Faye Dunaway an envelope for the wrong category, and footage reveals that Beatty was holding a card reading “Best Actress in a Leading Role.”

As the epically embarrassing snafu unfolded, Warren explained to the shellshocked audience, “I opened the envelope, and it said, ‘Emma Stone, La La Land.’ That’s why I took such a long look at Faye and at you. I wasn’t trying to be funny.”

No one knows how a slip-up of such magnitude was made during the most important awards show of the year; however, PwC LLP, which counts the ballots casted by the members of the Academy, has taken responsibility for the upset, issuing the following apology.

Reactions on Twitter were all across the board, with the most bizarre moment in Academy history prompting many to crack Steve Harvey jokes and even horror director M. Night Shyamalan to take credit.

Below, see the best Twitter reactions to the shocking mix-up:

Good morning everybody! Went to sleep early last night. So… what I miss? #Oscars

I wrote the ending of the academy awards 2017. @jimmykimmel we really got them!

I'm also very sad for the MOONLIGHT crew. I wish that they had the full experience of winning best pic without the awkwardness of it all.

I've been a film critic for 18 years and I covered the #Oscars for 10. That's the weirdest thing I've ever seen, but it was handled w/grace.

Nothing that happened on the stage should overshadow the major achievement of #Moonlight winning #BestPicture at the #Oscars tonight. pic.twitter.com/4S9bv9kUkI