This baby is ready for your next trip to Walley World. 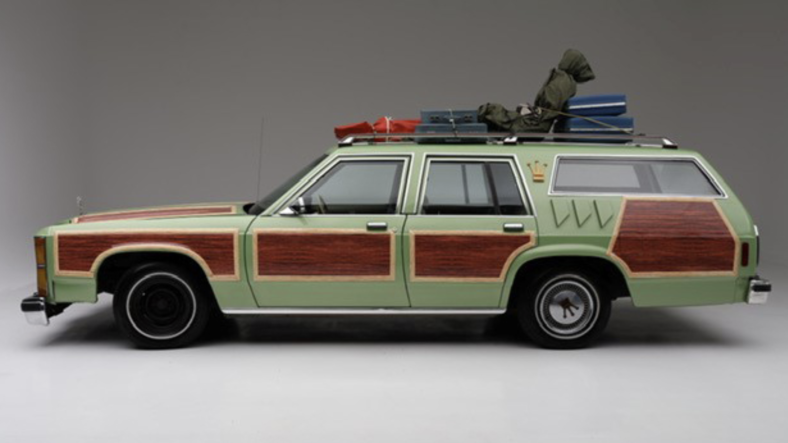 National Lampoon’s Vacation rolled into theaters in 1983 and promptly blew everyone’s minds. It was flat-out gonzo hilarious, a live-action cartoon featuring Chevy Chase at the height of his popularity.

In the movie Chase’s Clark Griswold is a hapless but determined suburban dad piloting the epic “metallic pea” colored Wagon Queen Family Truckster LTD across the country on a mission to visit Walley World, obsessed with dreams of Christie Brinkley along the way.

It’s pretty much one of the greatest comedies of the 20th Century, and that’s why this perfectly-rendered Family Truckster set to head to auction in April is such a great find.

Here are some of the basic details about this baby from Barrett-Jackson collector car auctioneers: “This Ford Station Wagon re-creation is based on the car in the movie National Lampoon’s Vacation, starring Chevy Chase and Beverly D’Angelo. It’s powered by a 5.0-liter 8-cylinder engine and an automatic transmission.”

This Truckster began life as a drab turd-brown 1981 Ford LTD Custom Station Wagon—after we googled the VIN we found the initial listing for the unmodified Ford here (it’s not pretty). So make no mistake, this is a re-created version of the movie car, not an actual prop vehicle with Chevy Chase’s butt sweat still in the upholstery.

Modifications were made on the engine as well as the body, so it apparently has some get up and go under the hood. It might just have the juice to handle a Griswold-style cross-country journey, after all.

As for where to begin with bidding, the auction listing says you need to “Request bidder info.” Get on that now—Walley World is waiting.