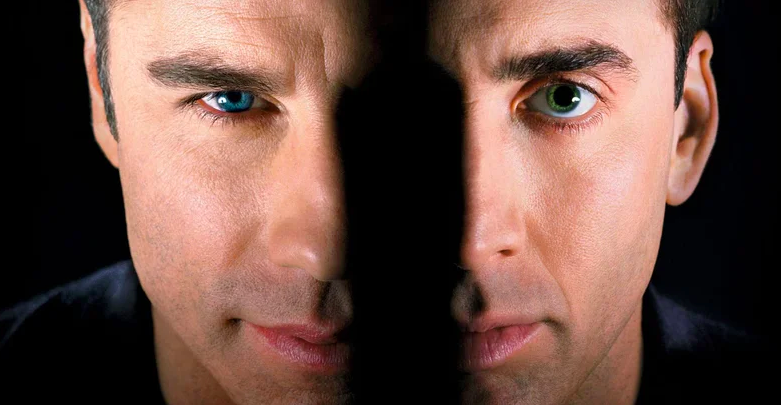 “The premise is Nic Cage plays a psychopath and John Travolta the FBI agent chasing him, and they swap faces!”

Sounds like a movie pitch guaranteed to get you booted off a production studio lot and maybe even slapped with a restraining order, but the movie, Face/Off, was really made in 1997, and it was demented, awesome, and also action director John Woo’s biggest hit.

How could anyone possibly reproduce such perfection? There’s no answer to that question yet, but Deadline reports the writer for 22 Jump Street is prepared to give it a shot.

In its exclusive, Deadline reports that Paramount “will reboot the film, with new cast. Oren Uziel has been set to write the script, and Neal Moritz will produce and David Permut will be executive producer.”

In addition to Jump Street, Oren Uziel also reportedly wrote The Cloverfield Paradox and Sonic the Hedgehog. So he’s perfect for this.

Here’s the original synopsis for the Cage-Travolta version, which ultimately made an astonishing $245 million in worldwide box office receipts:

Obsessed with bringing terrorist Castor Troy (Nicolas Cage) to justice, FBI agent Sean Archer (John Travolta) tracks down Troy, who has boarded a plane in Los Angeles. After the plane crashes and Troy is severely injured, possibly dead,Archer undergoes surgery to remove his face and replace it with Troy’s. As Archer tries to use his disguise to elicit information about a bomb from Troy’s brother, Troy awakes from a coma and forces the doctor who performed the surgery to give him Archer’s face.

Seriously, the original movie was a Woo classic, with all the gun-fu-infused action you could want as well as Cage and Travolta both at the top of their scenery-chewing forms. It was unreasonably entertaining as long as you didn’t think too hard about the premise.

Today both Nicolas Cage and John Travolta are in career doldrums (Travolta’s recent The Fanatic has been called “a career low“), but in ’97 they were solid box office draws—one thing you can say about either actor is they are never boring.

Let’s hope whoever takes on playing face-swapped good and bad guys this time is up to that daunting challenge.