Patrick Stewart Would Return to the ‘Star Trek’ Universe for Quentin Tarantino, So Make It So

The O.G. Jean-Luc Picard has always wanted to work with the ‘Inglourious Basterds’ director. 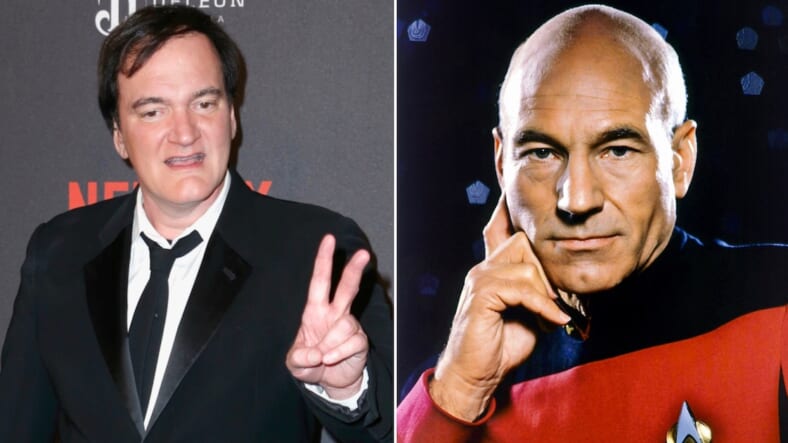 News recently broke that Quentin Tarantino was assembling a writer’s room to work on a script for a new Star Trek movie adaption, with J.J. Abrams potentially on board as producer if all goes well.

Better yet, it’ll be rated R!

Now, we’ve got our first vote of approval from an O.G. trekker—actor Patrick Stewart, who played Jean-Luc Picard on Star Trek: The Next Generation.

“People are always saying to me, ‘Will you be Jean-Luc Picard again?’ And I cannot think that would be possible, but there are ways in which something like that might come about,” Stewart told The Hollywood Reporter.

“But one of my dreams is to work with Tarantino. I admire his work so much, and to be in a Tarantino film would give me so much satisfaction. So, if he is going to direct something to do with Star Trek and there was the possibility of dear old Jean-Luc showing up again and doing that for Mr. Tarantino, I would embrace it.”

Stewart then expounded on why Tarantino would be perfect for the film.

“The one thing that characterizes all of his movies is that frame by frame, it always challenges, always demands your attention, always demands a very kind of open and generous response to what he does,” he said. “I also love his sense of humor as a filmmaker. So yes, he would be my first choice.”

That said, Tarantino has not yet officially said that he would like to direct the project… but there’s a chance.