You won’t believe how wide open Gronk was. 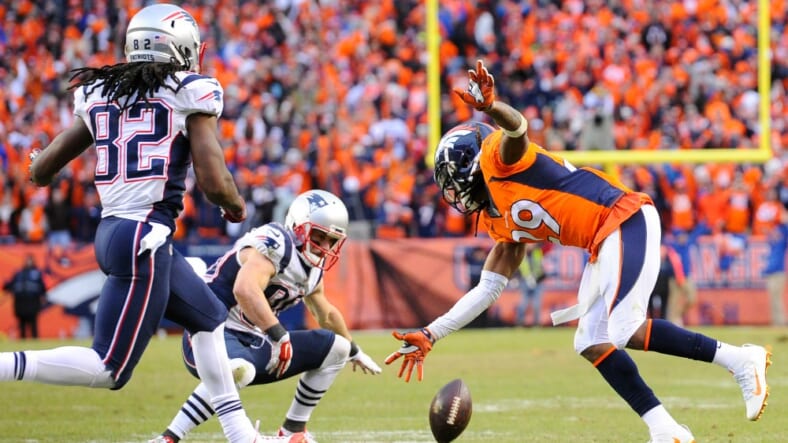 When the New England Patriots started their final drive eight points down in Sunday’s AFC Championship game, all they could have hoped for was for Tom Brady to work his magic and tie the game. After Brady led the Pats offense down the field and hit Rob Gronkowsi in the back of the end zone for his only touchdown pass of the day, that’s what seemed likely for the defending Super Bowl champs.

Then, two points down with the game and the team’s season on the line, the Patriots executed a horrific two-point play that sent the Denver Broncos to the Super Bowl and Pats home to snowy New England. And it may be one of the most embarrassing plays we’ve seen this season.

It started, as all two-point conversions, on the two-yard line. The Patriots lined up with three receivers and sent Gronkowsi and running back James White out in the open. With two yards and five options, smart money is always on Touchdown Tom. But this time he made an uncharacteristic mistake: After rolling to his right, the same direction Gronk was running, Brady turned and threw back to his left.

Forget how much more difficult it is to throw across your body. Forget that Julian Edelman, the receiver on the other end of Brady’s pass, was double covered. Forget that Edelman wasn’t even in the end zone when Brady released the ball. And remember one thing: Gronk was WIDE OPEN.

Gronk was wide open on the 2-pt try. Brady looked him off: pic.twitter.com/VCXheI6v24

If Brady lofts a ball to the back of the end zone, his team’s best receiver and the league’s best tight end has a damn good shot at catching it. And even if the pass falls incomplete, isn’t giving Gronk a chance to tie the game what you want? He had just carried the team down the field for a touchdown, beating double coverage the whole way. This time he had just one lowly linebacker on him. Instead, Brady chose a difficult throw, in traffic, to a player standing on the one-yard-line.

Brady’s mistake is fairly obvious, but the Broncos lethal defense deserves some credit too.  Brady was supposed to hang in the pocket, where he does his most damage, and find a receiver from there, but the problem, as it was all game, was Broncos linebacker Von Miller and the matadors disguised as Patriots offensive lineman. Miller was in the backfield almost immediately on the two-point play, forcing Brady out of the pocket and into a bad decision.

There’s plenty of blame to pass around for this failed conversion — the offensive line, the coaches who called the play and kicker Stephen Gostkowski, whose missed extra point in the first quarter necessitated the two-point attempt. But when your nickname is Touchdown Tom, you’re supposed to throw touchdowns, or in this case, two-point conversations. Brady didn’t and his team lost.