The Broncos and Patriots Are Talking Some Serious Trash 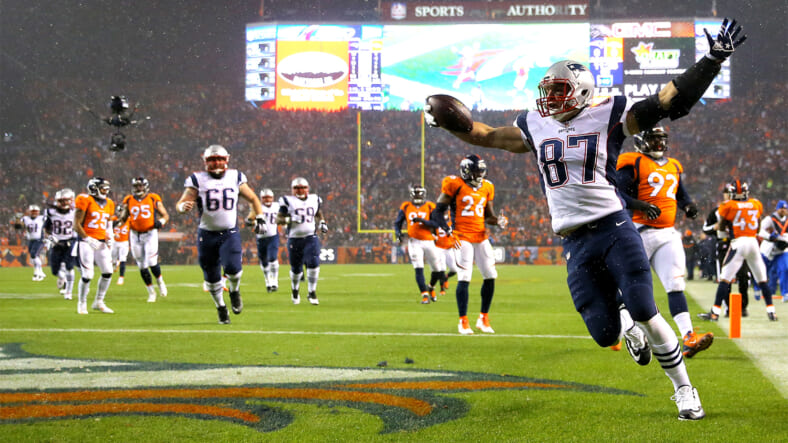 The Denver Broncos think Tom Brady is a crybaby and Rob Gronkowski thinks the Broncos suck dick. That’s the CliffsNotes version of this weeks’ trash talk between the Broncos and the New England Patriots, their opponent in Sunday’s AFC Championship game.

We begin in Denver where two members of the Broncos vaunted defense, the league’s best in 2015, called pretty boy quarterback Tom Brady a “crybaby.”

“Every time he gets sacked, he looks at the ref like, ‘You see him sack me? Was that supposed to happen? He did it a little hard. Please throw a 15-yard penalty on him,'” said Broncos defensive lineman Antonio Smith on Monday. His teammate Malik Jackson backed him up on Tuesday. “I mean, when we played him, he definitely threw some temper tantrums,” Jackson said on NBS Sports radio. “I know I wouldn’t be whining like that, but some people do.”

Not all Broncos were disrespectful of the Patriots. Cornerback Chris Harris praised Pats tight end Rob Gronkowski for being so damn hard to tackle. “You gotta hit him low, man — hit him in his knees,” Harris said Tuesday on ESPN. “That’s the best chance you have of hitting him.”

A fan tweeted about the comment, tagging Gronk and warned him to be careful about getting hit in the knees. Gronk responded in the Gronkiest way possible.

Just in case you’re dense, he’s suggesting that the Broncos are good at giving blow jobs. Not the greatest look for Gronk, but not really a surprise. He might have the body of an NFL tight end, but he’s got the mind of someone who still giggles when he tells people the position he plays.