But it checks some nostalgia boxes. 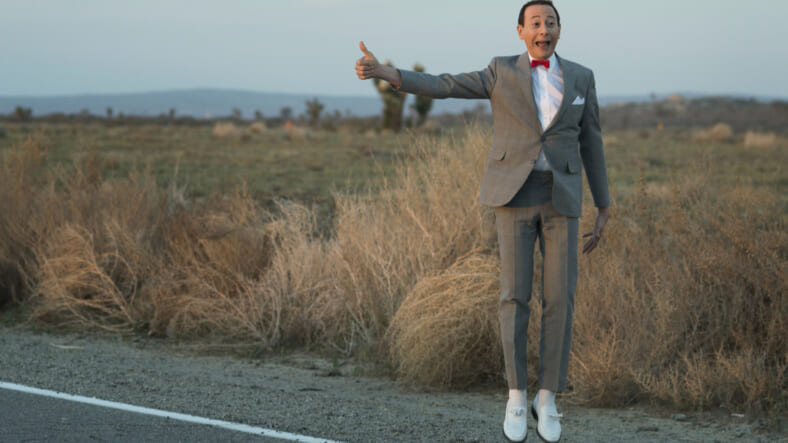 The film’s plot essentially boils down to Pee-wee being stuck in a rut and wanting to get out of Fairville, his hometown. Once given a reason to leave, Pee-wee embarks on a cross-country journey to the Big Apple, and as soon as he steps foot outside city lines, his series of escalating misadventures begin — although not all of them are particularly rewarding or funny.

In a lot of ways, Pee-wee’s Big Holiday continues in the style of his two previous feature films — they all begin with dream sequences and feature the same wacky, childlike humor. Big Holiday actually plays like a modern reimagining of Big Adventure at times, all the way down to the opening transition into Pee-wee’s Rube Goldberg-style morning routine.

While Pee-wee’s boyish charm is amusing throughout, the gags are just too hit or miss. For every laugh-out-loud moment, there are several that fall flat. It’s no surprise that most of the laughs come from Pee-wee’s goofy physicality, but all the inventiveness and magic that made Big Adventure memorable is nowhere to be found, and instead replaced with cheap bits with little to no payoff.

Tim Burton’s Big Adventure gave audiences a reason to care about Pee-wee’s titular adventure in that there was a plot (find that bike!), a villain (who could forget Francis?!), and virtually every gag was in service of its narrative. By comparison, Big Holiday is a completely aimless road movie with no real propulsion from one scene to the next.

Throughout the film, it feels like Pee-wee’s good-natured zaniness is repeatedly wasted on underdeveloped, and occasionally mean-spirited, jokes. I’m not sure anybody was clamoring to see Pee-wee kidnapped and bound to a chair.

The proof is right there on the screen — for every overwrought sequence that disappointed, the film would redeem itself with a quintessentially silly and decidedly “Pee-wee” moment, like when he spends a full minute (or more) of screen time slowly letting air out of a balloon and making accompanying sounds.

Paul Reubens (Pee-wee himself) co-wrote the script with Paul Rust, creator and star of Netflix’s new Apatow-produced comedy “Love,” which may account for some of the film’s more “modern” gags, and while Rust is a hilarious comedian and writer (any fan of Comedy Bang Bang can attest to that), his sensibilities may have hurt the film more than help it.

In an interview with Cinemablend, Big Holiday director John Lee very astutely noted the differences between the many iterations of Pee-wee Herman — the stage version is “punchier and crowd-oriented,” his children’s television persona more like an “obnoxious train of Pee-wee” and the movies as “way more subdued and in control.”

Pee-wee’s Big Holiday features Pee-wee more as an amalgam of these different personas than as anyone in particular, and that’s probably why it doesn’t work one hundred percent of the time.

For those who grew up with Pee-wee, Big Holiday ticks the nostalgia boxes and has enough laughs for me to cautiously recommend it — but you’ll be dusting off that old VHS copy of Big Adventure before watching it again.