A Chef Is Making Penis-Shaped Waffles, And Some People Are Butthurt About It 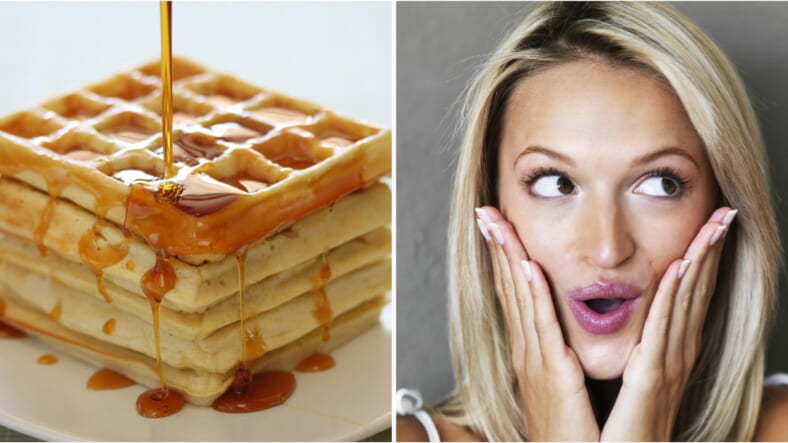 Lately, people all over the world have become quite good at defiling sacred and delicious foods, and I don’t know why it’s happening.

For instance, one so-called “chef” completely disrespected guacamole by adding apples to it, and I, along with the rest of the world, was personally offended by the recipe. Like, no. You can’t do that to something as pure as guac. It’s heinous and wrong.

An apple a day keeps your guacamole fucking inedible

And now, a restaurant stall in Bangkok found a way to defile waffles, but in a different way. And honestly, I think it’s pretty funny because it’s clearly a joke, unlike the apple guacamole. The internet, however, has mixed feelings about it.

Ketnita Prasertsomboon, owner of “Pho Hai Ma,” which translates to “I Got It From My Dad,” has created a cheese and sausage waffle shaped like a penis, and while most people people love it and think a penis is a sexy snack (sorry, I had to), others literally cannot deal with it.

Outrage on the yellow side of the Thai media spectrum about a lady selling curious looking waffles in Bangkok. But customers have fun. pic.twitter.com/Y806ZJ0VWM

A famous Thai chef named Yingsak Chonglertjetsadawong is boycotting the waffles (haha) and encouraging others to join him, because he’s deeply offended that someone would dare to create a phallic food item.

“From my time in the food industry, I never thought I would encounter food shaped like genitalia,” he said.

I guess he’s never seen a banana or a hot dog before.

“Would you buy this for your parents? Would you put this in a monk’s alms bowl? If a girl aged 7 or 8 was eating it on the street, is that something you’d want to see?”

Wow, I think Chef Chonglertjetsadawong needs to take a deep breath and relax a little. It’s just a waffle. And why would you want to put a cheese and sausage waffle into a monk’s alms bowl? Is that a thing?

“Some women take photos of themselves about to eat the waffles, or even videos of themselves eating one to post online. It’s inappropriate and a bad example for the youth.”

“Some people told me that I’m doing something obscene and un-Buddhist,” owner Prasertsomboon said in an interview. “I got a bit stressed, but I didn’t fight back. I just want people to view it as a snack.”

Hear that, Chef Chonglertjetsadawong? There’s nothing wrong with eating the D as a snack.