Once again, the comedy icon was ahead of his time. 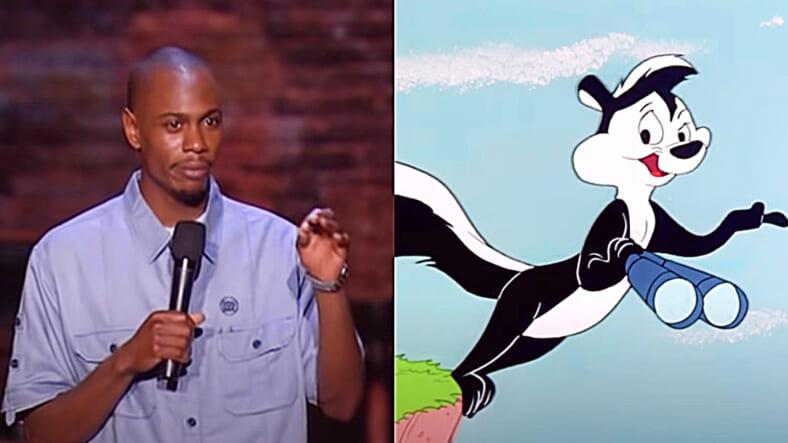 Dave Chappelle‘s 2000 stand-up special Killin’ Them Softly was filled with the kind of comedy that would go on to fuel his megahit Chappelle’s Show and make him an icon. It included a bit about Warner Brothers cartoon character Pepe Le Pew, in which Chappelle talked about how ‘toons you loved as a kid look very different to adult eyes. Watch below.

Chappelle was ahead of his time in calling the character a “fucking rapist,” of course. It took 21 years and a column by the New York Times‘ Charles M. Blow, but Pepe Le Pew has been canceled—in a couple of ways.

Pop culture seized on the fact that a smelly character with a roguish French accent whose main romantic approach is chasing and attempting to (presumably) screw a cat he mistakenly thinks is another skunk is totally out-of-step with the times, especially in the age of #MeToo. The character was also cut from Space Jam: A New Legacy (a.k.a. Space Jam 2), starring LeBron James.

In an exclusive, Deadline reported on the deleted “hybrid live-action animation scene” shot in 2019 between Jane the Virgin actress Greice Santo and Pepe Le Pew:

Pepe was set to appear in a black-and-white Casablanca-like Rick’s Cafe sequence. Pepe, playing a bartender, starts hitting on a woman at the bar played by Santo. He begins kissing her arm, which she pulls back, then slamming Pepe into the chair next to hers. She then pours her drink on Pepe, and slaps him hard, sending him spinning in a stool, which is then stopped by LeBron James’ hand. James and Bugs Bunny are looking for Lola, and Pepe knows her whereabouts. Pepe then tells the guys that Penelope cat has filed a restraining order against him. James makes a remark in the script that Pepe can’t grab other Tunes without their consent.

Greice Santo was reportedly upset that the scene was cut because according to Deadline, the “actress-singer has been a victim of sexual harassment and has spoken out against it.”

The timing makes it clear that the edit had nothing to do with Blow’s column, but some conservatives have been vocal on social media about how this is just more evidence of “cancel culture,” in which people boycott something or someone they find objectionable or offensive.

Part of a quote given to Deadline by Greice Santo’s spokesperson illustrates why the scene in which she appeared should’ve perhaps been left intact: “Even though Pepe is a cartoon character, if anyone was going to slap a sexual harasser like him, Greice wished it would be her.”

“Now the scene is cut,” the spokesperson said, “and she doesn’t have that power to influence the world through younger generations who’ll be watching Space Jam 2, to let younger girls and younger boys know that Pepe’s behavior is unacceptable.”