Did you hear that Peyton Manning really, really loves Budweiser? 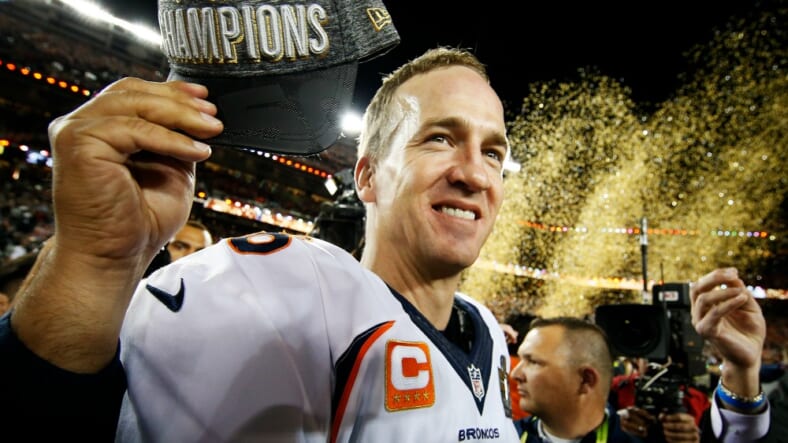 The Denver Broncos emerged victorious over the Carolina Panthers at Levi’s Stadium on Sunday, but Peyton Manning didn’t leave the field a winner. Dogged by damning new revelations in the doping allegations against him (that Manning hired two private investigators to pose as cops and question the primary source in Al Jazeera’s bombshell investigation into his use of HGH) and somewhat overshadowed in a primarily defensive game on Sunday, Super Bowl 50 isn’t necessarily the game Manning wanted to ride off into the sunset with.

But that’s OK. You know why? Because Manning loves Budweiser and really wants you to know it:

Was Manning paid to rave about Budweiser or something? I mean, he’s a two-time Super Bowl champion so he can absolutely drink whatever the hell he wants, but this exuberant Bud lovin’ is so awkward in so many ways — especially given how much those mentions are probably worth:

So was Manning paid to give the beer a shout-out? Not at all, according to a spokesman for the brand:

A rep for @AnheuserBusch tells me: Peyton Manning "was not paid to mention Budweiser. We were surprised and delighted that he did."

According to published news reports, Peyton Manning has some ownership stakes in Bud distributorships, which might explain tonite's mentions

Peyton, you idiot! A distributorship is one thing, but you’re gonna rave about Budweiser on national television, at least get paid for it! Now you just look cheesy and kind of lame.

"I'd like to thank my wife, my kids, God and Budweiser."

Peyton Manning gets a $2 million bonus for winning tonight. Maybe they are paying him in Budweiser.

I might be crazy, but I think Peyton Manning REALLY likes Budweiser. #theypaidhimClydesdalesmoney