Wading through the allegations that have rocked the NFL. 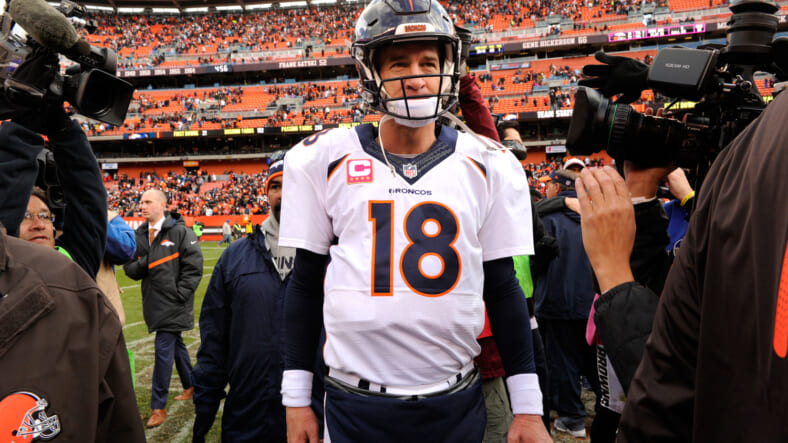 On Sunday, Al Jazeera aired a bombshell of a documentary that linked several high profile athletes to performance-enhancing drugs. Denver Broncos quarterback Peyton Manning was one of the athletes fingered in the months-long investigation, and certainly the most famous.

First, a bit about the documentary, which is called The Dark Side and available on YouTube right now. British hurdler Liam Collins went undercover as a former elite athlete desperate to get back to the top and spoke to several people who claimed they could hook him up with a magic elixir. Charles Sly, a former intern at the Indianapolis-based anti-aging Guyer Institute, claims that he shipped HGH to Manning’s home and that the quarterback and his wife made after-hours trips to the Guyer Institute for treatments.

Manning, for his part, has denied the report with the kind of energy he hasn’t shown in a decade. “The allegation that I would do something like that is complete garbage and is totally made up,” Manning told ESPN. “It never happened. Never.”

Plenty of other people mentioned in the report have issued similar denials, but Al Jazeera is standing by its story. Here are five things to know about this still-evolving story.

1) Manning’s not aloneThe first thing to know about the alleged Peyton Manning doping scandal is that it’s also the Ryan Howard, Ryan Zimmerman, Julius Peppers, James Harrison and Clay Matthews doping scandal. Those names aren’t as well-known as Manning’s so they haven’t attracted the same attention, but to the players themselves, the allegations are no less significant.

Steelers linebacker James Harrison said, “You have to check your facts before you write something like that.”

2) The primary source has since recantedSly is the sole source of the allegations against Manning and others, and he’s since walked everything back. “It wasn’t true, and I was trying to pull one over on Collins to see if he had any idea of what he was talking about,” Sly told ESPN after the report aired.

He claims to not even have worked at the Guyer Institute until 2013, two years after Manning was a patient. It should be noted, thought, that the institute told Al Jezzera different, according to a reporter. Also, Sly’s claim that he was lying on the undercover video featured in the film is a little hard to believe. As Will Leitch writes for Sports on Earth, “It’s not like Sly was some whistleblower; he was unknowingly taped and thus had no reason to lie other than to potentially impress a new client.”

But Al Jazeera publishes plenty of well-received investigations, and the organization consistently racks up accoldates and awards from respected news outlets. Sorry Mike, but don’t hate the player — hate the game.

4) Everyone is coming to Manning’s defenseThe Broncos say they don’t believe the story. The Colts called it “utterly ridiculous.” Dr. Dale Guyer, head of his eponymous institute, called Manning “one of the most honorable and upstanding individuals I have had the pleasure of knowing.” Manning’s one-time coach Jim Caldwell called him a “man of integrity.” Hell, even Tom Brady has publicly said he “fully supports” Manning.

5) There’s not much to see here.One wonders if this story would have blown up like it did if Manning had issued a single, strongly-worded denial and then stopped talking. Instead, he’s come out guns blazing and, in the process, potentially blown the story up even more.

The fact remains though, that even if Sly was telling the truth about HGH being shipped to the Manning home, no one knows who took it. It was shipped in his wife’s name, and she was a patient at the Institute. It’s been pointed out the HGH is a common treatment for women undergoing IVF and Manning’s wife had twins, common with IVF, in 2011.

Let’s take it a step further though and say that Manning did indeed take the drug. Does that really matter? HGH is used much more for recovery than enhancement. In September of 2011, Manning had his third neck surgery in 15 months. So an aging athlete uses a banned drug to recover from a persistent, career threatening injury? With all the of the issues in the NFL these days, that’s hardly one worth getting riled up about.