Peyton Manning to Bill Belichick: “This Might Be My Last Rodeo”

The Sheriff may ride off into the sunset. 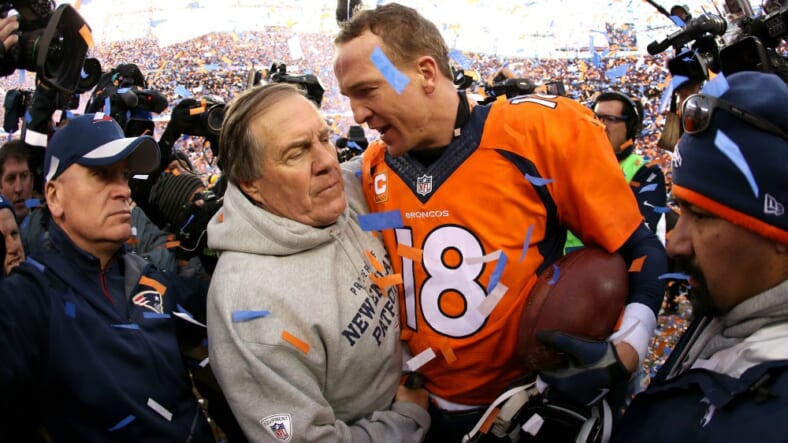 After the Denver Broncos knocked off the new England Patriots Sunday, winning the right to represent the AFC in Super Bowl 50, Broncos quarterback Peyton Manning and Patriots coach Bill Belichick shared a tender embrace in the middle of the field. With confetti falling on their thinning hairlines, the 39-year-old had a wistful exchange with the 63-year-old coach: “This might be my last rodeo.”

Manning said some other friendly things as well, but it’s this wistful line that caught most people’s attention. Despite a season of injury and ineffectiveness, the aging Manning appeared poised to play next season. In late November, one report said Manning is so dead set on playing as a 40-year-old that he’d do it outside of Denver if the Broncos no longer want him on their roster.But a lot has has happened since late November, most notably the release of a damning documentary from Al Jazeera accusing Manning of using human growth hormone (HGH) to up his performance on the field. Manning has vehemently denied the charges, but it’s hard to think the issue isn’t a serious distraction, particularly with the NFL investigating the claims. Just look what happened to Tom Brady: Despite being absolved of any wrongdoing in last year’s exhausting ‘DeflateGate’ saga, the scandal has left an indelible stain on an otherwise remarkable record.

Something tells us that Manning may consider quitting while he’s ahead. If Manning does retire after Super Bowl 50, he’ll do so as one of the greatest quarterbacks to ever play the game. He’s the NFL’s all-time leader in passing yards and touchdowns, a five-time NFL MVP and, as of today, a one-time Super Bowl winner.

The odds look decent that Manning will call it a career in a few weeks, but we can think of one person who likely hopes he’ll reconsider: Bill Belichick himself. When the Broncos beat the Pats on Sunday, Manning’s playoff record against Belichick improved to 3-2. You can bet Manning’s 2016 salary that the Patriots head coach wants a chance to even the score next season.