“Lick my asshole, how about that?” 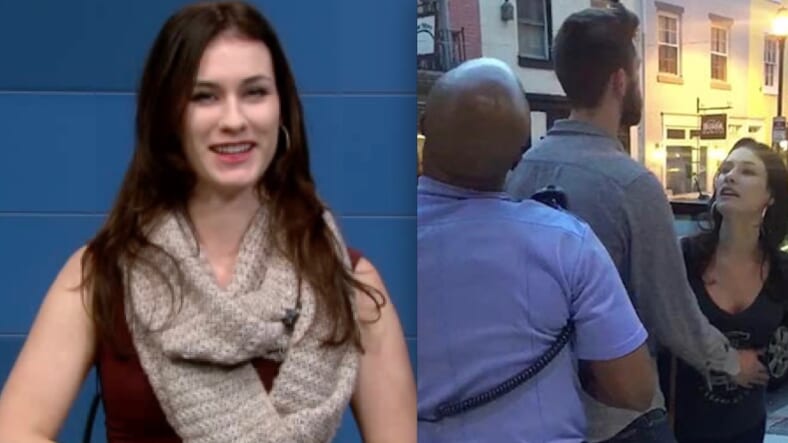 Philadelphia TV reporter Colleen Campbell has gone viral after getting booted out of a comedy club for disrupting a stand-up set by comedian Craig Robinson.

That’s because once Campbell, 28, was brought outside and started arguing with cops, she unleashed a totally bonkers rant for the ages.

Unsurprisingly, video of her tirade, which was posted to Facebook by New York-based comedian Wil Sylvince, has ruined her life.

Campbell told Philadelphia magazine that she believed she was drugged and that she was fired from her job—as a reporter for PHL 17—after the video went viral on Tuesday.

The New York Post has the rest of her explanation for her outburst here:

Campbell, according to Philadelphia Magazine, claimed in a Facebook post that she only had one drink and suggested she might have been drugged before deleting her social media accounts. She’s been receiving “threats” and wants to apologize to the officer, she told the magazine.

“That’s not me or how I talk or act or anything at all,” she said. “I don’t know what to do. I feel ruined and embarrassed for me and my family.”

Asked why she thinks she was drugged, Campbell said “everything was foggy,” adding that she remembers getting into an altercation at the club but said she didn’t know what about.

In her original Facebook post on the incident, Campbell claimed to have had only one drink, but she admitted having a total of five, including two shots an hour before the show and some while bartending earlier Sunday.

“I feel awful,” she told the magazine. “That’s not me or how I speak or how I talk or how I was raised. I had to delete all my social media, because I’m getting threats.”

Asked about the calm and collected cop who displayed extreme restraint during the incident, Campbell said: “I wanna apologize to the officer. I don’t remember the whole altercation at all. I remember feeling attacked. I would never talk like that. It was like watching a whole different me.”

We gotta admit she’s pretty salty in the clip above, but it’s really no worse than the abuse Philadelphia Eagles fans hurl at fans of opposing teams, FWIW.