‘Death Stranding,’ ‘Spider Man’ and ‘The Last of Us 2’ are making the PS4’s future look bright. 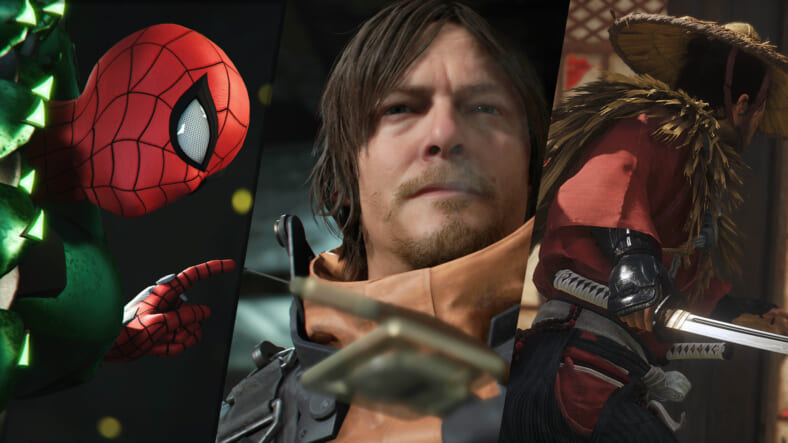 Sony turned their E3 press conference into a veritable theme park this year, taking the audience through earnest recreations of the worlds you might find in their games. With a focus on a deeper dive into what’s new, we’ve seen more from the upcoming Sony exclusives than we expected… and it’s intense. Check out what’s coming for Playstation 4 for the rest of 2018 and beyond.

What’s not to love about Spidey? Sony knows he’s a favorite character, and their newly reverential treatment of him in the MCU is carrying over to their treatment of him in video games. We actually got to play with the web slinger’s new game, and it’s everything we hoped it would be — a huge, gorgeous recreation of Manhattan with silky smooth swinging down avenues and a combat system that truly makes you feel superhuman. With this much polish already in the game, we can’t help but wish Playstation would push up Spider Man’s release date from the announced September 7th launch.

Playstation hit paydirt when they unleashed The Last of Us at the end of the PS3’s life cycle. Its sequel is now incoming and takes the heavy storyline deeper with the characters we’ve all grown so fond of. TLoU2 promises an even more impressive experience, one that preserves the stealth survival action of the original but deepens your relationship with Ellie and the rest of the survivors. Still no sign of a release date but, with Sony showing off this amount of polish on both the cinematics and gameplay, we’re hopeful to see what’s next for Ellie before 2018 is out.

Unprecedented realism marks the look of Kojima’s next masterpiece. The plot remains shrouded in mystery, but the trailer Sony played revealed a distinct time paradox that seems similar to Edge of Tomorrow. If that’s the route Death Stranding eventually takes, we won’t be mad at all. With the smoking hot Lea Seydoux joining the cast with Mads Mikkelson and Norman Reedus — and looking as accurate as them too — it’s hard not to start getting excited to see what Kojima has in store for us now that he’s put Metal Gear to bed. Like a Kojima game, though, we’re not holding our breath. It could be a while before we’re all taking a cop of Death Stranding home.

The stunningly beautiful and undeniably deadly samurai action adventure features a killer mix of cinematics and gameplay, with horse riding, sword fighting, stealth dropping and arrow shooting interspersed among the cherry blossoms, flaming villages and tall grass of the Japanese countryside. This is definitely one to watch as Playstation continues to knock it out of the park when it comes to single player adventure games that are easily confused with Hollywood movies.

Matter doesn’t matter in Control, a game that seems intent on bending physics in the most mindfucking ways. Sony showed off little more than a teaser, but it was enough to pique the interest of everyone in the room with it’s killer visual style, a few moves that look borrowed from Jedi, and some kind of quantum gun that we just can’t wait to get our hands on.

It’s not exclusive to Playstation, but Sony did take time from it’s exclusive-heavy announcements to drop a huge trailer for the overhauled remake of Resident Evil 2. A favorite among Resident Evil die-hards, RE2 is finally taking a shape worthy of the reverence it gets from fans. Seriously, it looked really, ridiculously good. Doesn’t hurt that it’s going from announced to store shelves on January 29th, 2019 in less than a year.

The same oddball, awkward humor that has us loving Rick and Morty is getting distilled into the partnership between Justin Roiland and Playstation to give us Trover Saves the Universe. We’ll cop to the fact that we have not a goddamn clue what to expect here in terms of gameplay, but lowbrow humor seems to be guaranteed. The fact that this is an exclusive on Playstation 4 and PSVR makes it all the more baffling. We can’t help but feel like that’s just the way Roiland wants it.