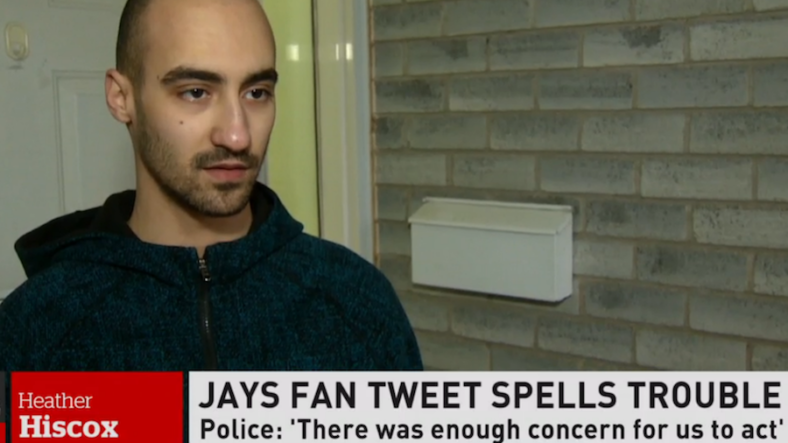 Canadian police paid a visit to a Toronto Blue Jays fan on Saturday because he threatened to throw a statue of the team’s dead owner into Lake Ontario. Maybe Canada’s not so great after all.

The threat came in a tweet that 24-year-old Nicholas Kharshoum wrote last month. In response to a story about the Blue Jay’s contract negotiations with stud outfielder Jose Bautista, Kharshoum wrote, “F**king pay the man or I’m throwing the Ted Rogers statue in the harbour you pieces of s**t.”

Pretty tame by Twitter standards and so forgettable that when police showed up at his house, Kharshoum had to ask which of his tweets they were upset about. “I know that I said something dumb, and it is not the only dumb thing I’ve said on the internet,” he told the CBC.

Maybe, but Kharshoum is hardly the bad guy in this story. That honor belongs to the security team at the Blue Jays stadium Rogers Centre, who read that dumbass tweet and actually thought it merited a call to the police. Remarkably, the police did the team’s bidding, tracking Kharshoum down and wagging their finger at him over a hyperbolic threat to an inanimate object.

Rogers justified its paranoia in a statement: “Blowing off steam is OK. It happens. But threatening violence is not.” Forget that throwing a statue into the ocean is more vandalism than violence and focus instead on how big the damn thing is. The statue weighs 800 pounds. Kharshoum wasn’t moving it with a backhoe. They got worked up over a threat that was impossible to follow through on.

In the end, it’s hard to know who look worse here. Is it the filthy rich company that tattled about an innocuous “threat” to a statue of its late owner? By the way, what kind of sports team puts up a statue of its owner? Or is it the police, who did the company’s dirty work? All that’s clear is that next to those two, the young baseball fan who spends too much time on Twitter looks like the normal one.