25 Facts About ‘Pulp Fiction’ on its 25th Anniversary 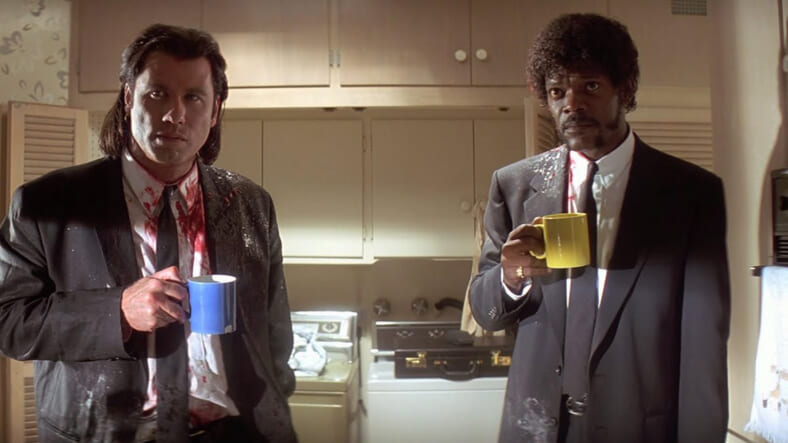 2. Amanda Plummer’s “Honey Bunny” character was named after the pet rabbit of Linda Chen, who typed up Tarantino’s handwritten Pulp Fiction script. Chen asked Tarantino to watch her rabbit while she went on location in lieu of payment, but he refused. The rabbit died and QT named Amanda Plummer’s character after the dead rabbit.

3. Tarantino originally wanted to use “My Sharona” by The Knack in the Gimp scene, but another 1994 film Reality Bites was already using it. So, he went with The Revel’s “Comache.”

4. Tarantino was happy with his song choice, though. “It would have been too cutely comic,” he told Rolling Stone had he gone with “My Sharona.” “I like using stuff for comic effect, but I don’t want it to be har, har, wink, wink, nudge, nudge, you know?”

5. While filming Mia’s overdose scene, Uma Thurman revealed that Campbell’s mushroom soup was used to simulate the spittle in her mouth.

6. But while the spit was actually soup, everything else including the bountiful tears flowing from her eyes were real. “I worked myself up, acting,” she told Vanity Fair. “I don’t think we put anything in my eyes. You’re paid for something.”

7. Pulp Fiction was first released in South Korea, Slovakia, and Japan before it was released in America.

8. Around 20 years after the film was released, a casting wish list that Tarantino allegedly wrote was leaked online. Apparently Gary Oldman was considered for all major roles, and Johnny Depp and Christian Slater were back-up choices for Pumpkin.

10. Tarantino was living in Travolta’s first apartment in Los Angeles when they first met.

14. Vincent Vega’s 1964 Chevelle Malibu –which was actually owned by Tarantino in real life — was stolen after the film’s release. It was eventually found almost 20 years later.

15. Vincent Vega is the only character in the entire film to appear in all four vignettes that make up the movie.

16. The first poster for the film showed Thurman smoking from a box of Lucky Strike cigarettes, but Miramax hadn’t purchased the proper usage rights. Lucky Strike threatened to sue, so Miramax returned the posters. Any of those posters that are still out there today are each worth hundreds of dollars.

17. The role of Jules was essentially written for Samuel L. Jackson, as he was Tarantino’s first choice. But when actor Paul Calderon auditioned for the part Tarantino was so impressed that he almost hired him instead of Jackson. To change Tarantino’s mind, Jackson flew to L.A. and auditioned again.

20. During the scenes when Tarantino is acting as Jimmie, Robert Rodriguez — who collaborated with Tarantino on From Dusk Till Dawn and Grindhouse — took over as director.

21. Tarantino wrote the part of Butch as a young boxer with Matt Dillon in mind for the role. Dillon took too long considering the part, so it was changed to accommodate Bruce Willis.

22. The part of Vincent Vega was actually written for Michael Madsen, but he dropped out two weeks before the script was completed to star in Wyatt Earp.

23. Vick Vega of Reservoir Dogs is Vincent Vega’s brother. Tarantino even considered creating a spinoff called Vega Brothers as a prequel to both films.

24. The wrap party was held on set at Jack Rabbit Slim’s diner, and Travolta and Christopher Walken reportedly tore up the dance floor together.