Brush up on your Shakespeare. 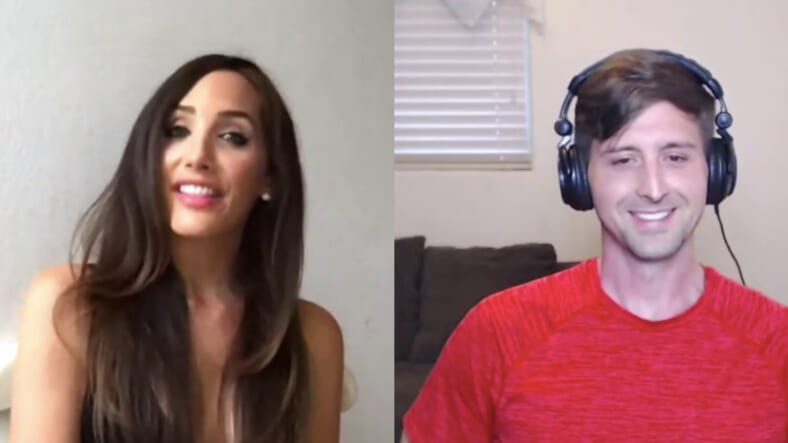 Brooke is an actress and writer raised outside Philadelphia and currently lives in Los Angeles. She’s a graduate of USC and currently co-hosts her own web series, Obviously Not Linked In, which launched in April 2020. She brings her self-deprecating and sarcastic wit to the series, hoping to make others smile during quarantine. She says she is a creative artist and storyteller at heart.

The three contestants who went head to head to win over Hutton and the prize of a virtual date with her were: actor and novelist Philip Carlisle (@eros_author), model and former professional beach volleyball player Bennett Pollack-Reeber (@bennettsbeeninit) and educator and sailor Nicholas Suech (@nicholassuech).

Each of the contestants came prepared to the competition with a 60-second pitch, or “approach,” as Quartship calls it. The approach is the contestant’s opportunity to woo, charm and impress their social media crush.

Brooke set the bar high by stating during her intro that it takes a really special guy to take her off the market. She also mentioned that she usually dates guys on LinkedIn even though the web series she currently produces is about interviewing working people who do not have Linked In profiles. This set the competitive juices going in the three contestants, who made strong introductions.

Philip Carlisle was the first contestant to make his approach. He came out of the gate with a strong lead thanks to his Shakespearean sonnet, which Brooke said was “breathtaking.” This earned Philip a total score of 8.7.

Next, Bennett presented the activities that he would invite Brooke to join, highlighting her favorites such as hiking and going to the beach. This presentation along with a snapshot of himself in a Burberry speedo earned him a score of 6.0.

Finally, Nick rhymed a few funny verses to win Brooke’s smile, which led him to score a 7.

In the end, the other two contestants were no match for Philip, who maintained his lead from start to finish. When both Brooke and Philip were brought on screen together, it was clear that they both had a lot in common and much to talk about.

Philip Carlisle is a third-generation Phoenix native. He double-majored in bio-med and pre-med and played soccer in college. He says he is an avid writer and has written six books. He is currently working on his seventh.

Philip is also an actor and personal trainer. He’s into MMA and is a phlebotomist and a deep water lifeguard. He’s also a member of MENSA and a Christian. His fun fact is an understandable goal: Philip wants to own as many Labradors as possible in his lifetime —he is currently at six.

Tune in to the next episode airing Thursday at 9 pm EST to see a recap of recent winners’ virtual dates—and a new line up of talent on Quartship.