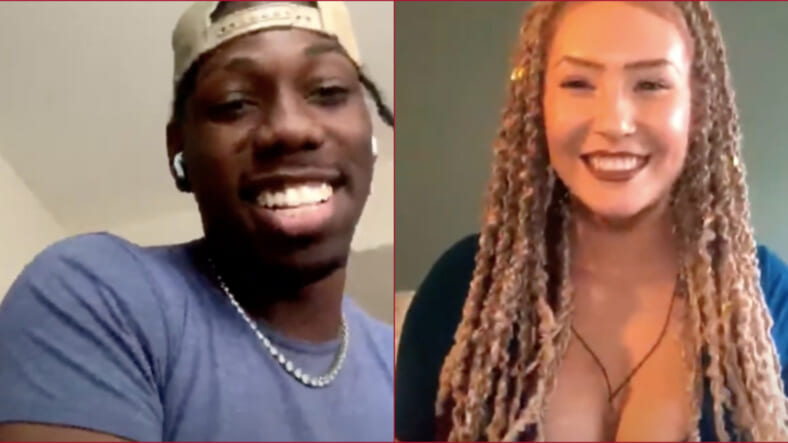 Born in Vegas and raised in Hollywood, FaithyJ has always been a performer, joining SAG (the Screen Actors Guild) before the age of 5. That was the age when she also started dance and Taekwondo classes. Through these disciplines, she learned about confidence and self-defense, eventually earning a black belt by age of 8. Today, FaithyJ is a multi-talented entertainment professional: actress, urban-pop recording artist and songwriter, author, dance choreographer, brand promotion model, mixed martial artist, and pro wrestler—Faith The Lioness on the hit TV series WOW Superheroes. An anti-bullying advocate, FaithyJ speaks and performs at youth events to support and promote kindness, success and equality as well as give leadership advice, self-confidence strategies and help in growing the awareness of this global dilemma among kids and teens.

One of FaithyJ’s newest projects is a reality tv show, One Mo’ Chance, out now only on The Zeus Network.

In their efforts to win a virtual date with their social media crush, each contestant prepared a 60-second pitch intended to display charm and wit.

FaithyJ said her first impressions of the lineup were positive and she was eager to get to know each one better during the Approach phase. That’s when each contestant has a minute to “shoot his shot” and win a virtual date by earning the highest score across the following categories: creativity, impact, and attraction.

Dante Blissit was up first. He assembled a video mashup with clips describing his loyal and trustworthy attributes and highlighting his and Faith’s shared passion for social media. His score: 7.7.

Troy Robinson went next. He sang an acapella version of “Let Me Love You” by R&B artist Mario. Faith bopped along to the beat and—impressed by the courageous serenade—gave him a score of 8.0.

Finally, Malcolm Minikon came prepared with a video but he highlighted big moments from Faith’s career, animating his own headshots over those of the men seen in his crush’s footage.

FaithyJ loved Malcolm’s energy, humor, and effort. She gave him a score of 10 across all 3 categories—and that was how he became the first contestant to ever win a perfect score on Quartship.

Winner Malcolm Minikon, a.k.a. “Minikon” is an avid traveler and social media marketer, with experience as a director for major record labels. This energetic social media influencer regularly travels between Dallas and Los Angeles.

Quartship is broadcast weekly to Maxim’s 3 million Facebook followers and 250,000-strong Youtube audience plus the cast and crews’ friends and followers.

Tune in to the next episode streaming Thursday, September 24th at 9 pm EST for more good vibes, fun, and a chance to witness old school charm live with a new lineup of talented contestants on Quartship!