Quentin Tarantino Is Ready and Willing to Direct a ‘Star Trek’ Movie, So Get Excited 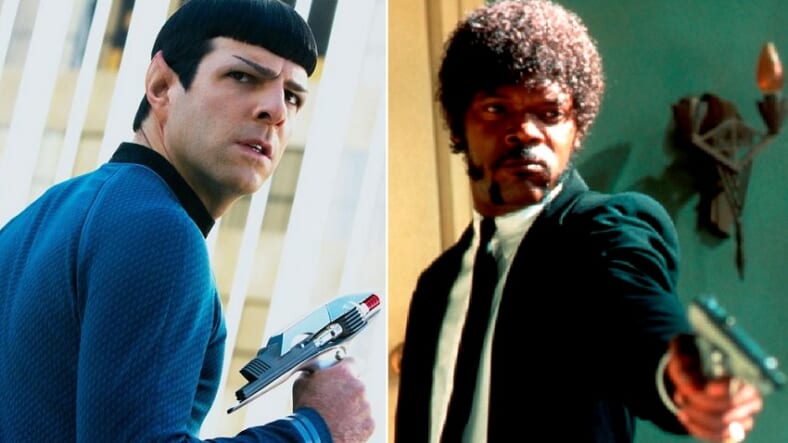 Imagine a dark, dank cellar, a shape chained to a post, desperate to get away. Struggling, the man grunts and strains against his manacles.

A shape enters and peels a leather gimp mask from the man’s head and chuckles. In Klingon, a voice says, “Captain James T. Kirk. Tell me more about this ‘Royale with Cheese.'”

Maybe not, if the Pulp Fiction director ever has his way. TMZ’s cameras caught up with him recently, and he said something surprising.

TMZ’s gossip vulture asks the director, “Quentin, if Star Trek genuinely wanted you, would you direct them?”

Even though he’s in motion, Tarantino looks genuinely thoughtful and says, “Uh… it’d be worth having a meeting about.”

The questioner goes on to ask if he’s really retiring after two more films, and Tarantino silently raises two fingers and nods.

The question wasn’t random. Guesting on a podcast recently, Tarantino got into the subject of directing a Star Trek film. From ComicBook.com:

“Where I actually think it could be cool — ’cause some of those episodes are fantastic, and the only thing that limited them was their sixties budget and eight days shooting schedule, and even having said that they did a magnificent job — but you could take some of the great, classic Star Trek episodes and just easily expand them to 90 minutes or more and really do some really amazing, amazing stuff.”

Tarantino went on to mention a classic episode from the the original series and it became clear if he had the chance he’d love to delve into the real consequences of time travel and its effects on various characters in the Star Trek realm.

Reminding us, in the process, that however cool so many of his sometimes ultraviolent movies have been, the director still has a 1980’s video store nerd inside him.

Someone at Paramount needs to get on the phone with Tarantino’s people immediately.