All 9 of Quentin Tarantino’s Movies, Ranked

“Oh, I’m sorry, did I break your concentration?” 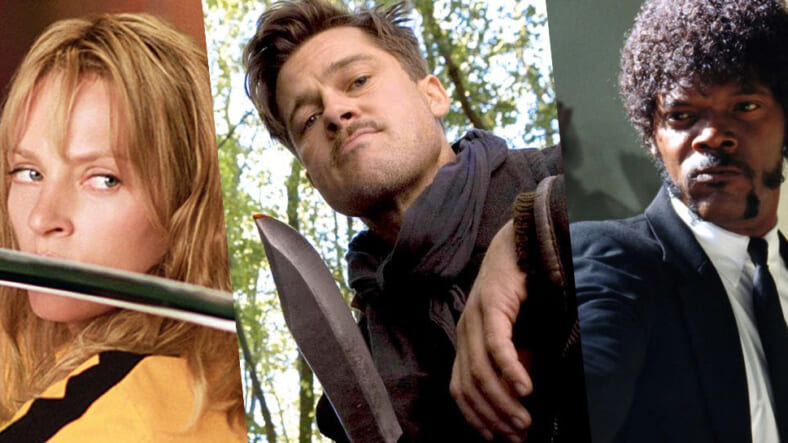 When it comes to making movies that forever changed pop culture, Quentin Tarantino ranks among the most influential directors of our lifetimes. Whether he’s spinning cinematic gold out of a heist gone awry, an epic tale of revenge, or rewriting an infamous chapter in American history, Tarantino’s films are unequivocally cool, highly stylized and seamlessly mix gratuitous violence with gleefully dark humor.

As casting news trickles out about his upcoming Manson Family epic, Once Upon a Time in Hollywood, we can’t help but look back at QT’s output with the hope that he breaks his promise of only making ten movies. Here is Tarantino’s filmography, ranked.

Half of the Grindhouse duo that Tarantino did with long-time collaborator Robert Rodriguez, Death Proof is an homage to a genre that obviously had an impact on QT. It’s last on this list because so many of the hallmark’s of a Tarantino film just feel like they don’t hit home in the framework of a B movie. It might be because Tarantino is just too good. Still, even the worst Tarantino directorial outing ends up being a blast and Death Proof helped put Kurt Russell back into the spotlight and that’s something we’re damn glad happened.

Inevitably cast in shadow as the follow up to Pulp Fiction, Tarantino’s crack at a blaxploitation homage has an unbelievably good cast and nails double crossing plot with plenty of style, both cinematically and with its dialog. Easily one of Pam Grier’s best roles, it’s a tragedy how easy it is for Jackie Brown to get lost in the mix of Tarantino’s other works. Even though we rank it low, it’s undeniably still worth watching.

The only sequel to Tarantino’s name, Kill Bill Vol. 2 had the nearly impossible task of having to wrap up one of Tarantino’s best stories. We have a lot of love for elements of Vol. 2, Pai Mei’s story is absolute perfection and Bill’s final monologue still stick out for us, but it’s the uncharacteristically mushy ending that continues to feel out of place over a decade later.

The Tarantino movie that perfectly captures the unease of being sequestered with your enemies, The Hateful Eight’s villainous murder-mystery is, somehow, endlessly rewatchable. Excellent performances abound as QT builds moment after moment of foreboding and apprehension. Samuel L. Jackson’s speech goading a Confederate veteran might be one of the best in any Tarantino flick, and the movie’s stunning cinematography is utterly masterful.

Perfectly balancing wild west adventure and humor, Django feels like a Tarantino movie out of place with the rest. That’s nowhere near a bad thing, either. Leonardo DiCaprio steals the show here, sliding into the villain role of Calvin Candie in a way that only Tarantino could get from an actor of Leo’s caliber. We didn’t expect this one to turn into a gorefest, but Tarantino’s hyper-stylized violence somehow works against the quaint background of the Antebellum South.

Tarantino doing kung fu is a high point for us. The story of the bride has everything going for it, and the iconic scenes QT put forth in Vol. 1 will stay with us for a long time. From the killer soundtrack to the anime interlude to the wonderful fight choreography of Uma’s showdown with the Crazy 88, Kill Bill Vol. 1 is endlessly rewatchable, even if Vol 2. Isn’t.

The movie that put Tarantino on the map did so with great, quotable dialogue and an unforgettable scene with an ear. So much of Reservoir Dogs feels personal to Tarantino; its Californian setting, its sidelong explanation of a Madonna song, even Quentin’s own brief cameo in that same diner scene. He may have been new to the director’s chair, but he was still able to knock out an undeniable classic straight out of the gate.

The huge cast, the revisionist history of a plot, the satisfaction of the bad guys getting what they deserve; there’s no wonder why Inglourious Basterds ranks high on this list. It’s one of the goriest and, simultaneously, one of the funniest of Tarantino’s movies, eliciting laughs, high-fives and cringes in rapid fire succession. We could watch Brad Pitt carve a forehead swastika any day.

Universally recognized as Tarantino’s most iconic film, Pulp Fiction’s twisting plots are career high points for Sam Jackson, Bruce Willis, John Travolta, Uma Thurman and possibly even Christopher Walken. Tarantino’s liberties taken with storytelling here solidified him as a undeniable auteur and locked in the trademarks that we look for in all of his movies. Pulp Fiction never misses a beat in its weaving of complex characters and stories, and is the yardstick against which all Tarantino movies must be judged, earning it the top spot on this list.

Years before Grindhouse, Quentin contributed one of the four vignettes that make up Four Rooms, the madcap tale of an overworked and (mostly) understated bellhop at a hotel on New Year’s Eve. The other three stories about troublemaking children, lunatic lovers and a coven of witches are all good, but Tarantino’s contribution—the final story about a high stakes bet over a lucky lighter—is pure Quentin. If you’re a true QT fan, you absolutely owe it to yourself to give this one a watch.