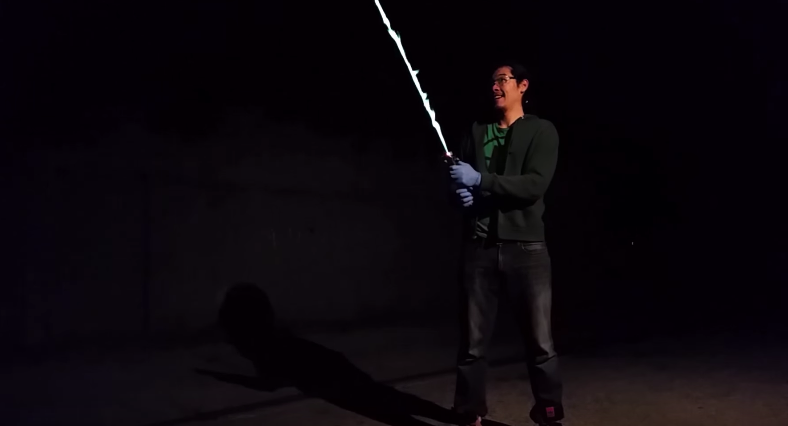 Inventor Allen Pan runs a YouTube channel called Sufficiently Advanced. He describes himself simply as a guy who tries “to make pretend things into real things.”

Pan’s channel has already racked up millions of views because he’s done a pretty damn good job of pursuing his stated goal—like the time he created a real immovable replica of Thor’s hammer Mjolnir. Now he’s magically managed—just in time to hook up with Star Wars: The Force Awakens mania!—to make a lightsaber of sorts.

A few caveats: it’s not truly a lightsaber. What Pan has created is actually an epic butane torch. As he demonstrates in the video, Pan assembled a nichrome ignition unit, a dual-purpose valve control, a nifty syringe valve inside a 3D printed holder, a blend of methanol and acetone for the fuel and finally butane as the propellant that makes it go. The end result looks as authentic as any mockup we’ve seen. In fact, other than the color it most reminds us of Kylo Ren’s infamously primitive-looking lightsaber, which was already a source of fascination long before Force Awakens premiered.

Pan admits on the lightsaber video’s YouTube page that he was inspired by a 2005 experiment described on TeslaDownunder.com in 2005. We like Pan’s spiffed-up version of the torch with the shiny hilt, however—imagine lighting up the coals on a backyard barbecue with that thing.