The gun-slinging game is back to stake its claim as the biggest release of the year. 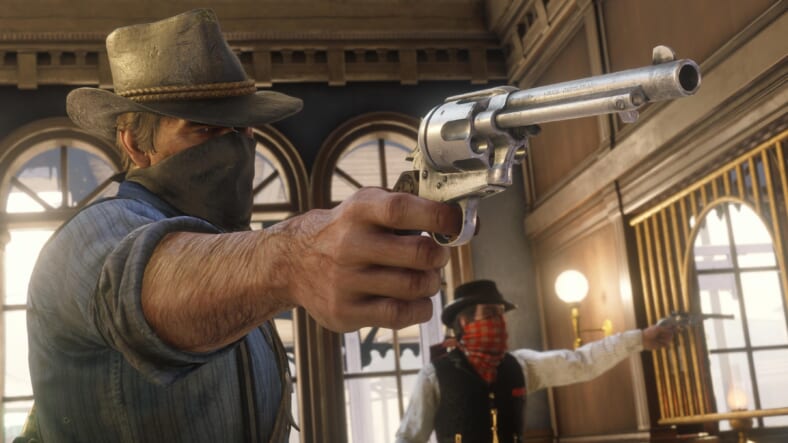 Right out of the gate, Rockstar reminds everyone that they’re masters of using every aspect of their games to tell a deep and complex story. On the lam with Pinkertons on their tail, RDR2 introduces you to Arthur Morgan, an essential part of the Van der Linde gang, as they hoof it to safety in the wilderness after a robbery gone sideways, leaving everyone with plenty of questions and lots of rebuilding to do.

Without spoiling anything, the story moves forward at every corner and in several ways. Exclamations during gunfights, diary entries, cryptic notes on the backs of found pictures and lengthy conversations with other gang members almost every time you mount a horse (which is often) Rockstar has jammed so much dialogue into the game. It’s rare to find an interaction that doesn’t progress the story or add missions to your agenda.

That agenda also feels unending because the map of RDR2 is utterly huge and dense with missions, hidden items and other miscellany to fill your time and encourage you to explore. Like most Rockstar games, especially GTA, only a sliver of the map is available initially but that quickly broadens to mammoth proportions. Snowy mountain ranges, huge green vistas, lakes and ridges; RDR2’s variety of natural scenery – a nice break after five years of GTAV’s urban warzone – is consistently stunning.

Rockstar seems acutely aware of their excellence in presentation and facilitate gamers enjoying it often, placing reminders of the cinematic camera option at regular intervals. That camera view – best used when setting your horse to follow the rest of the gang, a merciful convenience in world this size – creates immersive and gorgeous moments every time you switch to it. This is the first time Rockstar has developed a game in 4K out of the box and it looks amazing on Xbox One X.

It’s important to note that, while the graphics look fantastic regardless of the environment, there’s a fairly major shift that comes from being able to choose between first and third person perspectives.

The option to change perspective on the fly was a late addition to GTAV but it’s here from the beginning of RDR2 and the level of detail in gameplay animations, from shooting to looting to riding, regardless of the perspective, is astonishing.

That’s just a tidbit of a game that’s gigantic in scope. There are countless people to meet and things to pursue all over the world of RDR2. Many are the criminal endeavors you’d expect of a band of outlaws, offering up scenario after scenario where the game’s RPG elements, tight gunplay and close up brawling shine. There’s no doubt that Rockstar knows how to make a game where it’s satisfying to be a badass on the wrong side of the law.

However, other in-game pursuits, many of which are so uncharacteristically charming for Rockstar and a product of Red Dead’s era and setting, create far more highlight moments than I expected.

I’ll bite my tongue on most of the ones I’ve found, because these surprises are what make RDR2 great. But, just as an example, be sure to sit down for at least a few hands of poker along the way. It’s the details and one-offs like Hold ‘Em with random townies that lock down how Rockstar does open-world games better than anyone else.

Jam packed as it is, the colossal solo campaign is likely to keep even the most eager players with plenty to do for weeks. That’s a good thing because RDR2’s online component, still without much official detail, won’t be available for a few more weeks.

That’s not unprecedented nor a dealbreaker; GTAV’s online element was also not available at launch and yet it’s still going strong five years later. That said, if RDR2’s world is laying down the framework then Red Dead Redemption Online has all the makings of an addiction when friends are finally allowed to gang up and run rampant in its Wild West world.

Until that happens, everyone everywhere will undoubtedly enjoy what Rockstar has accomplished here. Longtime fans will appreciate the way RDR2 builds on the mythology of the Red Dead series and perfects so much of what’s come before.

Newcomers will be enamored by the massive world and action-packed gameplay. Everyone will ponder the choices they make and what kind of effect they’ve had on the outcome of Arthur’s story.

After eight years, Red Dead Redemption 2 has set an ultimately high bar for the series and certainly stakes a claim for the best game of 2018. (Buy here)