The man who created binge-watching has radically transformed corporate culture for the better. 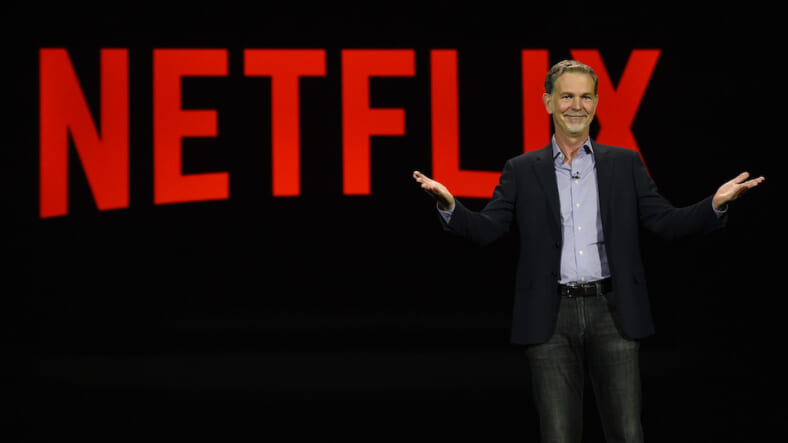 By many accounts Reed Hastings had lost his mind. The
year was 2011, and the Netflix cofounder and CEO had
just made a decision that cost him 800,000 subscribers
in one quarter. The company’s stock price plummeted
35 percent.

The market was punishing Hastings’ company for
raising its subscription prices 60 percent and splitting the
streaming and DVD-delivery service into two separate subscriptions.
Pundits questioned Hastings’ fitness for the job. The Huffington
Post called the move “monumentally stupid.” A headline on Mashable
compared it to the New Coke debacle.

This was what anyone would call, in polite terms, a teachable
moment, and Reed Hastings was the rare leader who possessed the
intelligence and humility to be taught. Within a month he had
reversed the decision to split the service in two, but he kept the price
hike. It turned out to be the right move: Change course, but preserve
the objective. At the time, Netflix stock was trading at $77.50 a share.
Today it’s worth $400.

Iterative and pivot are clichéd terms in the tech industry, and both
moves can be fatal without focus and vision. Reed Hastings, 57, has
the uncanny ability to execute on all four fronts consistently. He beat Blockbuster’s location-based, pay-per-rental game by offering to mail
DVDs at a flat monthly rate.

He took YouTube’s streaming success,
paired it with HBO’s premium-content branding, and outspent everyone
for top talent to become the head of a $170 billion juggernaut that
has upended how we consume filmed entertainment and is now one
of the fastest-growing companies in the world.

We can thank him for
inventing binge-watching, funding much of the golden era of television,
and introducing international gems like the slow-burn,
surprise-hit Japanese reality show Terrace House. The success of Netflix—
by turns data-driven, emotionally resonant, and deeply personal—
parallels Hastings’ own evolution as an executive.

Hastings grew up comfortably in Boston as the son of a prominent
attorney and the cofounder of a nonprofit helping women in the workforce,
but he didn’t coast to his current billionaire status.

His first job
out of high school was selling vacuum cleaners door-to-door; Hastings
credits this experience with teaching him the fundamentals of sales
and customer service. He enjoyed it so much that he deferred attending
college for a year to continue working after graduation. “For me, the
thrill is making a contribution by solving hard problems,” he told
Fortune in 2010.

This impulse
exhibited itself early
on at Bowdoin College,
where he excelled in the
math department by winning
prizes but also by
changing how the department
itself was run. One of
his former professors, Bill
Barker, told the Bowdoin
student newspaper that
Hastings displayed “confidence
without arrogance.

He has a desire to make
things work right and get
them going.” After taking a
self-paced calculus class, Hastings took it upon himself to write up a
proposal to revamp the program. “We ran the program for well over 10
years and no student had ever turned in anything like that,” said Barker.
“He was already in the mode of planning and doing things.”

After college, Hastings briefly entered the Marine Corps officer
training program but quickly transitioned to the Peace Corps, working
as a high school math teacher in Swaziland, Africa, for two years. In addition
to teaching, the restless Hastings also devised a plan to improve
the community’s water-gathering system and developed a proposal for
harvesting and marketing the honey from local beehives.

These entrepreneurial
upsides of his education still influence Hastings: He was the
president of the California State Board of Education in the early days
of Netflix; currently serves on the board of a charter school advocacy
organization and an e-learning company; and recently donated $7 million
to the California gubernatorial campaign of former Los Angeles
mayor Antonio Villaraigosa, a staunch supporter of charter schools.

After the Peace Corps, the ever-prescient Hastings went on to
study the then-nascent field of AI at Stanford, a period he calls his
“lucky break.” While he’d previously thought of entrepreneurs as godlike,
spending time with them at Stanford was a nice reality check. “It
really helps to be around some of them to see they are regular people
with a good idea,” he said in an interview with venture capital firm Foundation
Capital. “The thing I took away was, If they can do it, I can do it.”

Early in his career, Hastings saw the power of mutual good
faith and effort in a business setting. While working for a startup, he
re counted in the same interview, he arrived early one day and saw
the CEO washing Hastings’ dirty coffee mug from the day before.
Hastings asked the CEO why he was the one washing it, and the answer created a feeling of loyalty he remembers to this day: “It was the
one thing I could do for you. You do so much for the company.”

Hastings went on to cofound a debugging-software company called
Pure Software, which was eventually sold, providing the funds required
to start Netflix in 1997. While his nickname at Pure Software was
Animal, he proved himself to be immensely human; after years of combative
meetings, it was there that he considered how to create a unique
corporate culture. With Netflix, Hastings saw an opportunity to yet
again improve an existing system.

He devised a philosophy of hiring,
management, and retention, which he and his management team laid
out in a document called the Netflix Culture Deck. Tweaked by Hastings
over the years, it’s posted on the company website and is likely the
most widely read employee manual in the world, with some 15 million
downloads.

The Deck prioritizes freedom and responsibility: Unlike
at most corporations, there are no dress-code rules at Netflix, no
vacation limits; radical honesty, full accountability, and transparency
are paramount. It emphasizes the notion of the company being run like
a sports team, not a family.

Nearly all corporate documents are cross linked
and available to all employees (despite everyone having access to
viewership numbers of their
programs, there have been
few leaks). At Netflix, Hastings
has created what many
see as a utopian corporate
culture, not because of foosball
tables, yoga, or amenities
(or even the industry leading
compensation packages
in which employees are
allowed to decide what percentage
of their salary they
receive in cash or stock),
but because good work is
the reward.

And the good work is
working. Netflix is investing up to $8 billion in acquiring and creating
original TV and movie content, including deals with cultural influencers
like the Obamas, Shonda Rhimes, and Ryan Murphy. And while its
mastery of the high-minded (think The Crown, Godless) is integral to the
brand, Netflix also isn’t above producing content like The Kissing Booth,
a low-budget teen rom-com that, at press time, was one of the most watched
movies in the world. Why? Because, as Hastings has said, “We
want producers and directors to be able to find the right audience, to
change the experience of helping people find movies they love.” And if
that’s an obscure rom-com and not an Emmy winner, so be it.

Reed Hastings’ success might be buoyed by radical and disruptive
execution and singular focus, but the fundamental principle behind it
all is as old as the adage “the customer is always right.” The algorithm
Netflix uses to interpret viewing data and personalize recommendations
influences a reported 80 percent of the choices viewers make. It
is a mirror that reflects our desires back to us with content we never
knew we wanted. And as Netflix produces more original shows, it’s
using that data to select producers and directors who are adept at
creating content that resonates—with an estimated 95 percent customer
retention rate, the company outperforms the industry standard.

In some countries, Netflix has 40 percent market penetration, but in
others it still lingers in the teens; that’s something Hastings plans to
tackle with his proven strategy of being radically and technologically
empathetic. Earlier this year he told Economic Times, “Given the consumer
base, the next 100 million [subscribers] for us is coming from
India.” And that’s just India. There’s a whole world of opportunity—and
potential subscribers—to be had. While Hastings has been CEO of
Netflix for 20 years, it’s clear he’s just getting started.