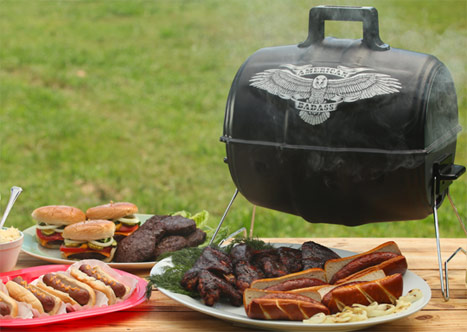 Guys in the U.S. and the U.K. share more than just a common language. When it comes to the manly art of grilling meat, we all immediately turn into any backyard cookout’s ultimate alpha dog, wielding those tongs like a king’s scepter.

Wales has a thing for grilling lamb in particular, and a Welsh outfit responsible for ensuring the meat comes from that country decided to survey 2000 adults about BBQ habits. They discovered 75 percent of the men in Great Britain are sole meat tenders come grilling time, with women consigned to handling whatever side dishes the Brits prefer.

Rhys Llywelyn is a rep for PGI Welsh Lamb in addition to owning a tongue-twisting name. Regarding their survey, he said they “wanted to try and understand a bit more about the psychology of hosting a barbecue, and whether people are really getting the best out of their outdoor cooking.
“

“Grilling outdoors can be a fantastic way to cook,” Llywelyn said, “but it requires planning, care and attention to get good results.
“

PGI Welsh Lamb’s poll also found that men have twice the confidence of women regarding their skills at the grill.

In a revealing moment, 51 percent of the women who responded to the survey said they thought men took up the tongs just did it to look more macho.

The survey also found that men are much less likely to think they need to improve their barbecuing skills.

While the American percentages are weighted toward men dominating this summertime ritual, things are a little more equal here. A 2015 report found 44 percent of the grillers in US homes were male and a mere 22 percent were female.

However 62 percent of the women were much more likely to be experimental once they had control of the heat.

One thing’s for sure: summer is nearly over in Great Britain and in the US, so if the woman in your life wants a run at experimentation—on the barbecue—you haven’t got much time left to hand over the tongs.