One Ridiculous Line of Dialogue Completely Ruins ‘The Revenant’

Sticks and stones can break his bones… 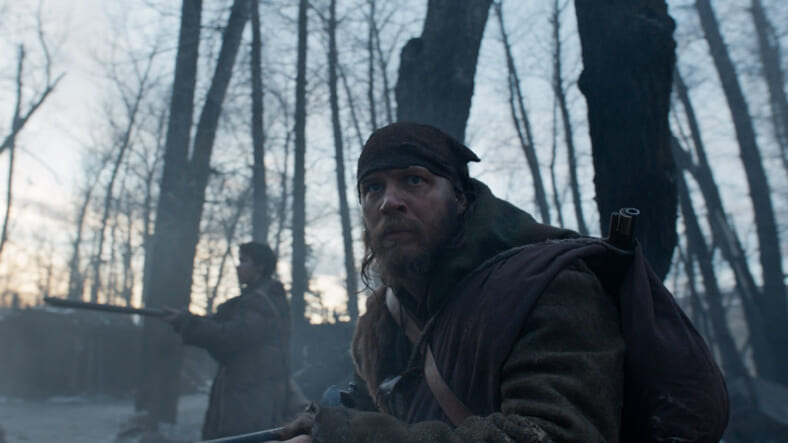 Hugh Glass, the legendary fur trapper and mountain man played by Leonardo DiCaprio in the new film The Revenant, was a very tough dude. The epic tale of his survival after being mauled by a bear and left for dead was already thrilling audiences back in the 1820s, when Glass was still in the beaver-trapping business, and it’s been recycled numerous times since, for good reason.

Hollywood told the tale again just a few years later, with Apache Blood, starring Dewitt Lee.  The Icelandic indie-pop band Of Monsters and Men wrote a song about Glass. And, of course, Michael Punke revisited the tale in his 2002 novel The Revenant.

The film adaptation of Punke’s book, directed by Alejandro González Iñárritu, is one of the year’s most beautiful and haunting pieces of cinema, and if it actually does manage to win a few Oscars, including that widely anticipated first statuette for Leo, we won’t complain. (There are certainly worse options.)

The film is exquisite in many respects, not least the way it defies Hollywood convention. It moves at a glacial pace and features mostly grunts in place of actual words. It thrusts viewers into a pitiless landscape filled with brutal deprivations, wild predators and unremitting violence. And though it stars two of the industry’s most bankable male leads in Leo and Tom Hardy, it buries their pretty faces behind layers blood, dirt and and enough facial hair to outfit a convention of Echo Park barkeeps.

All in all, it’s a great film. A must-see. One of Dicaprio’s best efforts.

But there’s a problem: One deeply false line of dialogue uttered at a pivotal moment. A single unredeemable note of cheesiness that undermines everything that came before. And I’m going to quote it, so if you are planning to see the film and wish to avoid spoilers, stop reading now and go about your business.

First, some background: A meditative adventure drama crossed with a macho revenge fantasy, the film centers on Glass, who has become a skilled guide after spending years living with the Pawnee. On a trapping expedition, he winds up getting mauled by a grizzly bear in one of the most brutal man vs. wild sequences ever put on film. By the way, he’s not raped by the bear. Nevermind the Drudge Report’s “scoop” in early December, which claimed, “The bear flips Leo over and thrusts and thrusts…” No such luck. We’re talking zero penetration whatsoever. The bear is actually female, as the studio was quick to point out, and while in theory a female bear could maybe sort of rape a guy, it would take some very skillful foreplay. (Maybe in the sequel?)

Anyway, given Glass’s life-threatening injuries, the party agrees he will have to be left behind. A few fellow trappers, including John Fitzgerald, played by Tom Hardy, promise to watch over him while the others go in search of help, but then Fitzgerald changes his mind and buries Glass alive. For good measure, he first kills Glass’ half-Pawnee son, Hawk. Somehow Glass survives, of course, and spends much of the film seeking revenge.

In real life, Fitzgerald’s treachery went unpunished. “As far as we know, they never met again,” notes Clay Landry, a historian of the era who served as an advisor to the filmmakers and trained the actors in wilderness survival, building lean-tos, throwing tomahawks, and so on.

By the time Glass managed to return to civilization, his would-be killer had enlisted in the army, which protected him. “They told Glass, ‘He belongs to us now,’” Landry says. In Punke’s telling, the two men do have one more imagined encounter, at a military tribunal, during which Fitz makes a big smarmy show of his contrition, and Glass tries to gun him down, hitting him in the shoulder but leaving him alive.

Neither of those possible endings was ever going to fly in Hollywood, of course. This is a major prestige release with big-ticket talent attached. So instead, screenwriters Mark L. Smith and Iñárritu reached for a very well-worn page of the action-movie playbook and pulled out a thoroughly contrived—albeit somewhat more emotionally satisfying—climactic scene in which (you really might want to stop reading now) the two men conftont each other on a snowy pass.

They argue a bit about what went down. Fitz confesses to killing Hawk — brags about it, really. This is the moment when Hardy, who has delivered an impressive and finely layered performance as a capable and fiercely intimidating trapper and a mercenary shithead, turns into something else: a stock movie villain.

The line that brings this home, the sneering taunt that arguably ruins the film, is a reference to Glass’s son.

“Maybe you should have raised a man…instead of a girly little bitch.”

As absurd and out of place as it sounds, it nonetheless prompts an outraged Glass to unleash a gutterral roar of fury and lunge for him, setting the stage for Fitzgerald’s longed-for comeuppance.

But um, “a girly little bitch,” really? That’s the final straw? The great cathartic moment of release after all that unrelenting misery? It’s like a cheap groan-inducing punchline to a very long joke. But I guess the idea is this: Apparently, you can leave a guy for dead and kill his son in cold blood. NBD. But call him a “girly little bitch” and, buster, you just stepped over the line.

Remember, by this point Glass has survived a ferocious assault by Arikara warriors. He’s been literally ripped apart by a bear and buried in a shallow grave. He’s plunged into freezing rapids, galloped over a cliff on horseback, and taken refuge inside the carcass of an animal. He’s cauterized his wounds, Rambo-style, with a torch. He’s dragged himself, moaning and wheezing, his wounds barely caked over, across miles of rugged terrain. This is not a dude who is insecure in his masculinity, not one for whom the murder of his son is likely to be trumped by a schoolyard taunt.

Clay Landry was hired in part to alert the filmmakers when a proposed detail or bit of dialogue seemed unnatural for the time period. He pointed out, for example, that the actual story took place in the plains of northern South Dakota rather than in the Rockies, but the mountain setting was quite rightly deemed more cinematic, so he let it slide. “It’s hard to argue with that,” he notes. “It’s an artistic interpretation based on real events. Like they said, ‘We’re not making a documentary.’”

He said he called out some other questionable lines, for instance persuading the filmmakers to ditch the word “guys” for something more authentic to the era, like “fellas” or “men.” But the “girly little bitch” epithet didn’t really register with him, he says.

So far as we know, young Hawk never existed anyway, so who’s to say whether his pop would be sensitive to a jeering comment about his son’s manliness? But as an adolescent who was able to survive in one of the most forbidding landscapes on earth, and hold his own with hardened mountain men, the kid hardly seems like a wuss by any stretch.

Indeed, if anyone might be sensitive to the charge that he is a “girly little bitch,” it’s pretty much every dude (present company included) who buys a ticket for The Revenant. In fact, I defy you to watch this epic tale of survival, with a $7 tub of popcorn in your lap and an icy Diet Coke holstered conveniently in your cup holder, and somehow not have occasion to wonder just how you’d fare in the wilds of the American outback, whether you’d even make it through that first unbelievable Indian raid, much less any of the deprivations that come after. Guys—sorry, fellas—let’s face it: We’ve gotten pretty soft.

If you care to actually test your mettle, a good place to start is on the next wilderness “rendezvous” held by American Mountain Men, which will take place in northern Idaho in early July. First, of course, you’ll need to become a member, which is by-invitation-only, so you’ll have to meet two mountain men first and convince them of your worth. (You could start with Clay, who’s a member in good standing.) The many other requirements include possessing a set of hand-sewn clothing, a background in primitive camping, a proven ability to snare critters with a steel trap, and experience “[hunting] one game or fur animal with a muzzleloading firearm or primitive bow and [using] the skin and/or meat for food, clothing and/or accoutrements.” Oh, and you need to be able to converse in Plain Indians “hand talk.”

See you on the mountain, fellas!