Ric Flair’s Wedding Was as Bonkers As You Might Expect

The Undertaker double-fisted two whiskeys in one hand at the reception. 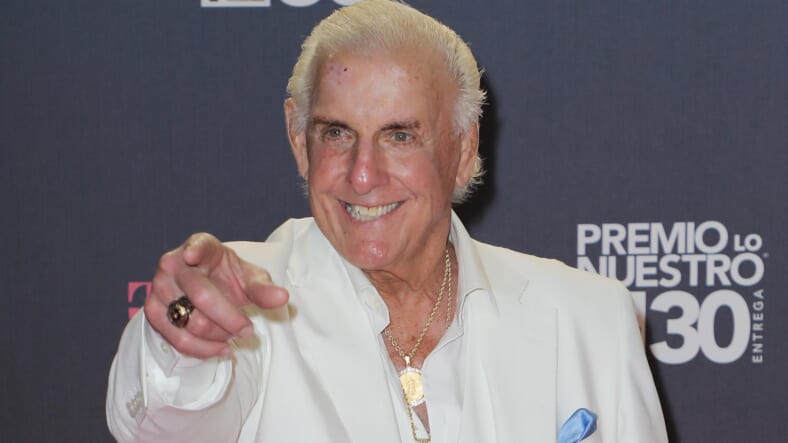 Ric Flair got married for a fifth time in a spectacle definitely worthy of the over-the-top pro wrestling icon known as “The Nature Boy.”

A white-suit clad Flair, 69, and his bride, former WCW wrestler Wendy Barlow, danced their way down the aisle to the hit 2017 song “Ric Flair Drip” at the Pearl Hotel in Florida. Pretty appropriate for a guy who once claimed to have slept with more than 10,000 women, right?

Iconic “woo” shouts were heard from guests as the 69-year-old rolled in wearing an all-white suit with a rose in his hand, to match the one worn on his lapel.

There was plenty of WWE royalty in attendance, with The Undertaker, Finlay and Michael Hayes all noted guests. Former world champion Dolph Ziggler had a special part to play in the wedding, giving Barlow away.

Dwayne Johnson’s mother, Ata Johnson, was another guest as she enjoyed the bash wearing a maroon blouse and slacks.

Flair has been with Barlow for six years, though the couple have known each other for considerably longer.

The 58-year-old Barlow competed in World Championship Wrestling as Fifi during the 1990s. Flair started competing in the WCW back in the early ’90s.

One of Barlow’s storylines involved being Flair’s maid. Barlow also got involved with Flair’s WCW match with Rick Rude at Fall Brawl 1993.

The 16-time world champion had plenty to celebrate after nearly dying in the hospital last year. Flair was placed in a medically induced coma, and was on life support for 10 days.

He claimed that medical problems — which included kidney failure and bowel issues — were due to his habit of downing nearly 20 drinks a day.

It’s good to see Naitch back in business. Check out some of his wedding highlights here: