Ridley Scott Is Officially Developing a Sequel to ‘Gladiator’

Are you ready to be entertained? 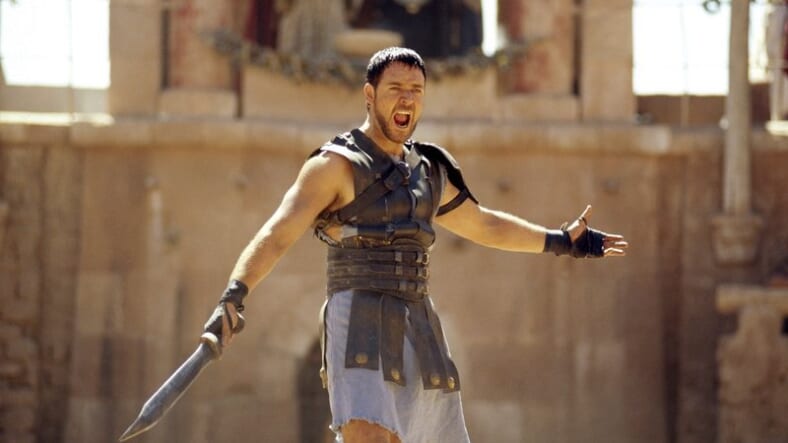 It’s been almost 20 years since Gladiator, Ridley Scott and Russell Crowe‘s blockbuster tale of Maximus—a Roman general who is enslaved then becomes a gladiator—dominated the Academy Awards. Now it looks as though Scott is ready to return to the arena with Gladiator 2.

The director has no issue with making sequels—in the last few years he has directed Alien: Covenant and produced Blade Runner 2049. Audiences didn’t necessarily crush each other rushing into theaters for those, but they weren’t failures, either. Scott has plenty of reasons to make a bet on this one.

The trailer for the first film alone makes a pretty good case for revisiting that world.

While Crowe’s Maximus character met his end in the classic original film, Gladiator 2 will follow the continuing story of Lucius, the son of Lucilla (Connie Nielsen), The youth was the nephew of Commodus (Joaquin Phoenix), the weaselly son of Roman leader Marcus Aurelius who murdered his father seized the throne and wound up in the gladiator ring with Maximus, who though mortally wounded, skewered the emperor before fading into the great beyond to reunite with his slain wife and son. Maximus saved the boy and his mother while avenging his own family, and left a strong impression on the young Lucius.

Every great movie could be mined for multiple sequel prompts, many of them tangential, but that sounds like a pretty solid storyline.

Deadline further reports that Paramount and Universal are involved.

The idea of a sequel to Gladiator isn’t new. Scott and Russell Crowe had Nick Cave write a script for Gladiator 2 a few years ago. As BMD reported in 2017, Cave’s script was insane. Here’s just part of BMD’s breakdown:

Cave’s script begins, as promised, with Maximus dead. His body lies in a dense forest, rain pouring down from above, and his well-armored corpse is soon set upon by a pair of wandering looters. A shadowy figure emerges from the gloom, killing one of the bandits and chasing off the other. The figure approaches Maximus, who suddenly sits up, wide awake and extremely confused. Where is he? What happened? And who’s this weird dude beckoning him to follow him back through the forest?This is Mordecai, who responds to Maximus’ litany of questions with a simple, “I keep the peace.” The two adjourn to a small encampment, and Mordecai explains that he just came from seeing Maximus killed in the Coliseum, a bit of news that goes over about as well as you’d expect it to. That night, Maximus is haunted by a vision, the same one we saw him struck by throughout the first Gladiator: a rolling wheat field, a large tree, his wife and child waiting for him next to a humble dwelling. This time, the vision is interrupted by rolling thunder and terrifying bolts of lightning. Wherever his family’s at, bad things are afoot. Maximus wakes up, vowing to find them.

Well, okay then. From there, Maximus wanders a bizarre netherworld in search of his family and seriously, it gets much, much weirder.

Read Cave’s insane script here, if you dare. It’s so crazy it would be a classic if Scott did choose to produce the thing. But it sounds like he’s going the rational route with the new sequel.

As the (hopefully non-weird) Gladiator 2 is obviously still in the works, no release date has been set.