In the new Starz show, sex is the most powerful and dangerous currency in a world where everything is up for sale. 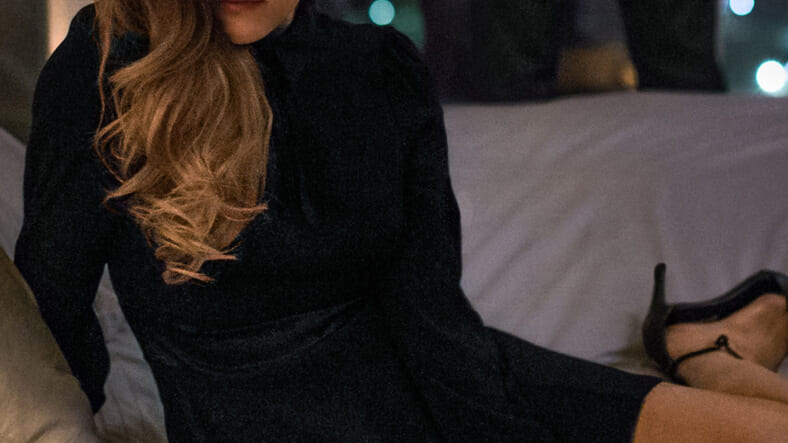 If you’ve heard anything about The Girlfriend Experience, you’ve probably heard about the sex — because there’s a lot of it.

The provocative new Starz series — the TV adaption of the broadly pretentious, overwhelmingly long-winded, and basically disappointing 2009 film starring porn actress Sasha Grey — has all the makings of a titillating hit worthy of binge-watching. Riley Keough, best known for being Elvis Presley’s eldest granddaughter and for portraying a fire-haired wild child in Mad Max: Fury Road, plays the lead role of a struggling law student who dives into the hidden world of high-priced escorts, offering “the girlfriend experience” to a steady stream of complicated men, women and couples.But outside of the obvious appeal of an inside look at the lurid world of escorts, there’s something more enthralling about the series. In 2016, when the most valuable commodity in the world is possession of a superhero franchise (see: every major summer blockbuster), the television adaptation of Steven Soderbergh’s film subtly but undeniably plays into that vogue. Where the filmic world is drowning in an ever-rising tide of superpowered spandex-clad dudes with questionable judgment (and the women who support them), Starz’s new show offers the closest thing to a real-life superhero-cum-femme-fatale that we’ve seen in a very long time — and boy, is it a glorious thing.

The (anti)heroine of the show, Christine Reade, is not a superhero in the conventional sense. She hasn’t been subject to a freak accident, she’s not unspeakably rich, and she doesn’t even really have what we traditionally think of as a ‘superpower’. Throughout much of the first episode of the show, she’s simply trying to survive the second year of law school while working an unpaid internship at a law firm and maintaining some semblance of a social life.

It’s not surprising, then, that her entrance into the profession of sex work is accidental, giggly, surreal – but the deeper she gets into this new world, a world in which power and money changes hands in the blink of an eye and each john possesses a new set of dangers and challenges which she must adapt to. They’re challenges she welcomes, though, and it becomes increasingly clear that she is both no doe-eyed call girl and that the more enmeshed she becomes in the twisted capitalist roleplay where everyone’s livelihood is at stake, the more powerful she becomes. Late into the series, Christine deftly states that “Everyone is paid to be everywhere, it’s called an economy,” accidentally tipping her hand on the justifications she applies to her every move.

But it’s important to note that Christine’s superpower isn’t sex, it’s her distance from it. Introspective yet alarmingly self-assured, Christine confesses to her sister, “I just don’t enjoy spending time with people. I find it to be a waste of time and it makes me anxious.” And that’s how she truly embraces her power; by identifying the one thing that she has no emotional commitment to, which enables her to engage and manipulate the outside world in a way that doesn’t compromise her sense of self. It becomes clear that nobody will ever satisfy Christine in the way that she can satisfy herself sexually, and she crafts the act into something detached and calculated, a single-sum game that she only plays when she can get something out of it. She makes sex into a weapon, a means to an end; where others fall to mush in a tangle of limbs and loves , Christine is invincible.

If this sounds extraordinarily cold and calculated, that’s because it is. But it’s also startlingly effective.

Christine’s superhero status stems not from the traditional battles with weapons but instead through wit, always planning ten steps ahead to outsmart whomever she’s up against. As her foes become more dangerous — a sinister madam, an obsessed stalker, a vengeful employer — she clings tighter to her hidden identity, so much so that by the end of the series, she’s barely recognizable, both physically and emotionally.

Visually, The Girlfriend Experience indulges in a brutalist minimalism in its set and costume design; most things are black and white and the splashes of color that pop up along the way are muted. Everything is futuristic and sophisticated, but nothing is practical and everything is fragile. The soundtrack is sparse and sometimes cuts out entirely, leaving human sounds to fill the void it has left. Many shots towards the beginning feature mirrors, granting Christine a buoyancy and duplicity of character, but as the show progresses the mirrors are replaced with windows – often approached from the outside of the building, giving the faint sense of voyeurism – and a constant reminder of the world outside that a consistent sense that Christine is out of her depth.

It’s these details that amplify Christine’s shapeshifting, providing an echo chamber for the lack of truth in her sentences and shrouding her in mystery. We want to sleep with her not because of what we know about her, but what we don’t know about her. Her power increases with time and experience, and the closer her fantasy life comes to her real life, the more detached she becomes from the person she once was, effectively making that second self stronger, more powerful, more devoted to whatever it is that she’s throwing herself into. And as the show goes on, her drive becomes less about career growth and financial gain, and more about survival.

Keough telegraphs Christine’s smoldering intensity perfectly– there are few times I felt I could look away from the screen, as I was worried I’d miss some small motion that would unlock her character and give away everything that lay beneath the surface. And to me, that’s the mark of a truly successful thirteen-part series; when you leave the room savoring the bow put on the end of the plot, yet aching to know what happens next. Where Batman and Superman punch their way out of trouble, Christine masters her world not with super strength but with hypnotic cunning and sheer force of will.

The Girlfriend Experience leaves you trying to figure out if Christine’s cold and calculating equilibrium is an achievable goal in real life — and, by extension, wondering if Christine’s superhero status could truly be a method of self-preservation and survival. There’s also the lurking question of whether or not Christine is really a sociopath, a fear that she admits several times over the course of the series. The running mantra in the Spider-Man series is “with great power comes with great responsibility,” but in Christine’s world, her only responsibility is to herself.

The Girlfriend Experience has garnered praise for its portrayal of sex work, its raw intensity, and the stellar performances by Keough and company. But it’s also an antihero tale at heart, a look at the power within that Christine unlocks through her sexual liberation, a place she reaches by shedding her deepest anxieties and embracing what lies beneath those fears. Viewers, like Christine’s johns, sign up for The Girlfriend Experience for the sex; but what they get themselves into is so, so much more.