Rob Riggle Talks ‘Stepbrothers 2’, Mayweather/McGregor And Ranks The Toughness of His Famous Co-Stars

“I’d pounce on him like a mountain lion on a wounded jogger.” 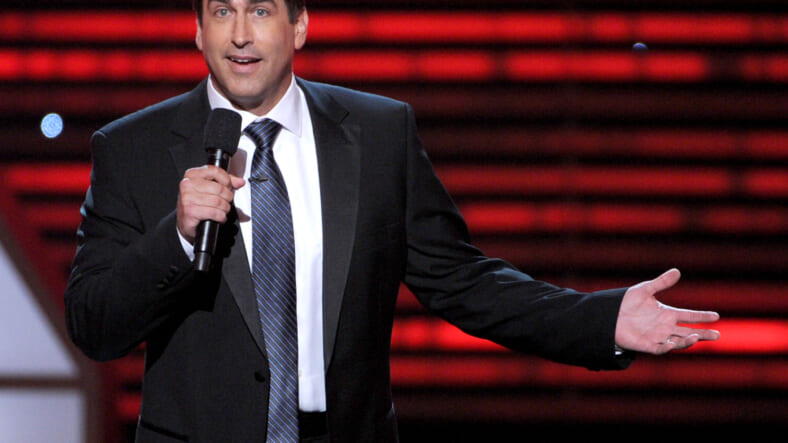 Comedians are supposed to be little, insecure and weak—unless they’re fat. The pain of existence is what makes so many funny people funny.

It’s rare to find a guy who’s neither an emotional or physical disaster who’s also funny, but Rob Riggle is one of those people. Despite seeming like a totally normal dude and being built like the 6-foot-1, 240-pound former Marine that he is, Riggle has won legions of fans with his impeccable timing that has led him to steal scenes in modern comedy classics (Step Brothers, The Hangover).

We recently caught up with Riggle as he promotes Holiday Inn Express, which is paying him to be his normal charming self in commercials and interviews. We asked him one question about that, because that’s what you do, but not before we talked about more important stuff, like the former Daily Show correspondent’s thoughts on that rumored Step Brothers sequel, Mayweather vs. McGregor and his ranking of the toughness of his most famous co-stars.

You were on The Simpsons earlier this year. I imagine that was an incredible experience. That was the thrill of a lifetime for me. I’m a huge Simpsons fan and getting to be on that show was everything you hoped it would be. Hearing your voice come out of a Simpsons character on an actual episode was awesome.

One of your most memorable roles was in Step Brothers. What do you know about the talk of a sequel?I know nothing about that, other than the rumors. There have been rumors since it came out. I hear the rumors too but I’ve never heard anything concrete. Believe me I hope they do because I think it’s a great movie.

I assume you’d be down for being in it.Yeah, if it happened, I would love to.

Let’s talk about the introduction of the Catalina Wine Mixer scene and your famous “pow!” line. Was that in the script?Those were improvised lines. We actually had to re-do that scene. If you get the DVD you can see the original scene in the deleted scenes, where I have a heart attack. That’s the great thing about working with Will Ferrell and Adam McKay, you get to improvise and that’s how I came up, doing improv.So I started screaming “pow!” at one point just because it was making Will laugh if I punctuated everything Adam [Scott] said with a “pow!”

I know you’re a big sports fan, and a UFC fan in particular, what’s your take on the biggest sports story in the land: Mayweather vs. McGregor.I think it’s definitely what the people want. They want to see it. And so it’ll be a great spectacle. I think it’ll have all the pomp and circumstance and all the hype. Hopefully they’ll build the drama up.

I don’t know how satisfying the actual fight will be. Mayweather is undefeated and his defense is incredible. Conor is, I don’t know him as a standup boxer, I know him as a UFC fighter. When he’s in the Octagon, he can use all his resources. How he does against Mayweather will be fascinating to see but I don’t think it’s going to be that close of a fight.

You have some hand-to-hand combat training of your own from when you were in Marines, right?Yeah, it’s called MCMAP, the Marine Corps Martial Arts Program, and everyone has to go through it. When I was in flight school, we had to go through boxing as well.

OK, I just wanted to ask you that to tee up my next questions. I’m going to throw some of your former co-stars your way and you tell me how you would have done in the cage against them.

How about Will Ferrell, who’s probably about your size, although a bit older a bit fatter?Oh he’s bigger than me. He’s a tall man. He’s got good reach. He would tag me a lot. Just use a straight jab. Would be hard to get past it. But as we got to the later rounds, I think he’d get winded. Then I’d pounce on him like a mountain lion on a wounded jogger.

Mark Wahlberg, he’s smaller than you but he’s pretty ripped.Yeah, that would be over incredibly fast. He would punch me once and he would probably knock my head physically off my body.

OK, I think you’re going to take this guy: Aziz Ansari.Don’t underestimate Aziz. Did you ever see Princess Bride? Remember when the Dread Pirate Roberts jumped on Andre the Giant‘s back? I could see that happening in this particular scenario.

Now let’s talk hotels! For one question at least. Before you were on the payroll of Holiday Inn Express, did you ever take anything home with you from hotels? Back in my college days, when times were lean, if I found myself in a hotel, there’s a good chance the shampoo left with me.

Shampoo is acceptable. You’re not taking ironing boards or anything.Oh god no. No, no. That’s crazy.