Holy crap, this kid can PLAY. 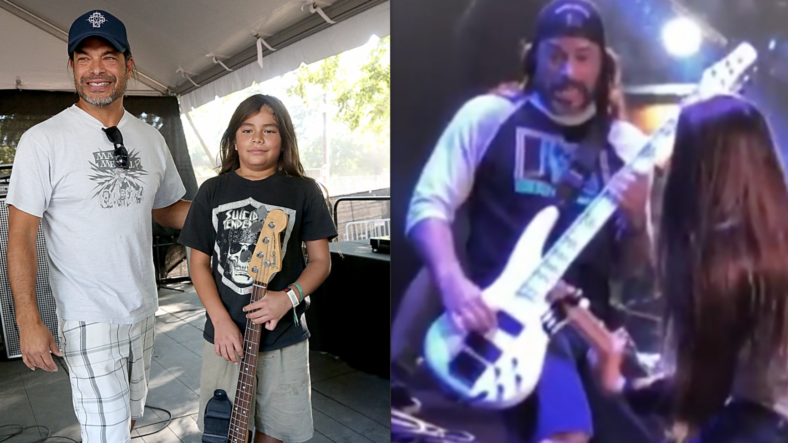 Metallica bassist Robert Trujillo’s 12-year-old son Tye has been busy living the life of a rock star on tour as a replacement for Fieldy, Korn’s regular bass player.

But during a concert in Lima, Peru, Korn fans got to see Tye play alongside his rock god dad during a rendition of the ’90s nu metal outfit’s groove-heavy hit, “Blind.” Watch the full performance above, and check out a close-up shot of Robert and Tye here:

Robert has been tagging along with the band to watch his kid play in front of tens of thousands of fans during Korn’s South American dates. And according to a recent interview he did with GloboPlay, Tye has put in all the work.

“It’s a beautiful thing, ’cause he’s still a 12-year-old and he still acts wild and crazy, as a 12-year-old should, but when it comes to music, he’s very focused,” the Metallica bassist told GloboPlay. “And with Korn, it’s funny, because I haven’t shown him anything at all for the Korn stuff — I’ve been too busy and I’ve been out of town a lot — and he’s taking this opportunity very serious.”

Touring with a band as big as Korn has surely made for some of the biggest moments of the young shredder’s life.

But don’t think that he got the gig just because of his pop’s legend status in the heavy metal world. This kid can seriously play—just watch him rip the bass line of Black Sabbath’s “N.I.B.”