The anti-hero of HBO’s ‘The Jinx’ was sentenced to 7 years behind bars, for starters. 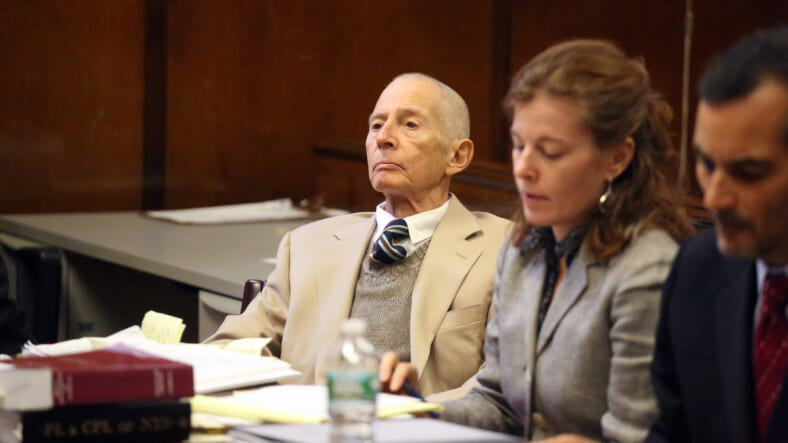 Robert Durst has taken the next steps towards facing the music for the multiple crimes he is widely believed to have committed: The 72-year-old New York real estate heir and subject of HBO’s The Jinx has pleaded guilty to illegal possession of a .38-caliber revolver and accepted an 85 month sentence in federal prison.

Durst will eventually be transferred to federal lockup in Los Angeles to face charges that he murdered a former friend, Susan Berman. Under the plea agreement, the prosecution has to arraign Mr. Durst there by Aug. 18. Durst is believed to have killed her because she may have possessed damaging information about the disappearance of Durst’s wife Kathy, who has been missing since 1983.

In the finale of The Jinx, Durst was caught on audio talking to himself and basically confessing to the crime: “What the hell did I do? Killed them all, of course.”

Durst has a habit of making things pretty easy on law enforcement, which makes it all the more astonishing that he remained a free man for over thirty years while admittedly being responsible for the death of at least one person and a prime suspect in the two others.

Several weeks after killing his friend Morris Black in Galveston, Texas, which he successfully argued was done in self-defense, the multimillionaire was picked up for shoplifting a sandwich at a Wegman’s supermarket.

And after making his televised confession on The Jinx, which he approached director Andrew Jarecki to make, Durst appeared in the lobby of the New Orleans hotel he was preparing to escape from just as investigators were about to leave, having had no luck in guessing Durst’s alias despite numerous attempts.