“Already I can feel the weight of this crown I wear.” 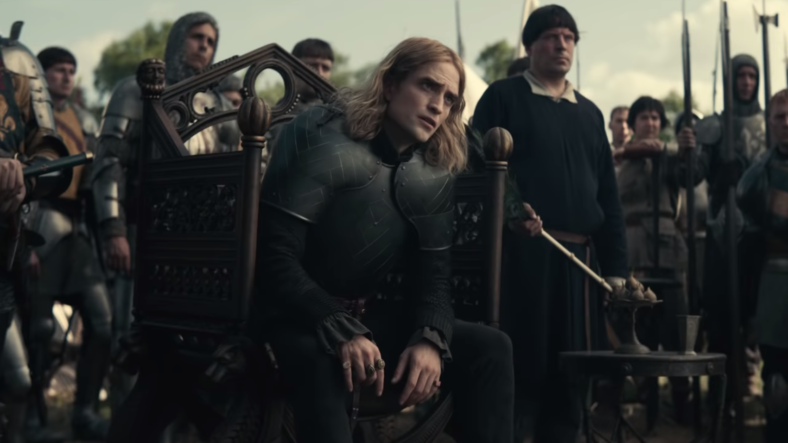 Timothée Chalamet and Robert Pattinson are “kings” to various overlapping fandoms, but now they get to play actual warring monarchs in Netflix’s The King—a new take on the story of King Henry V of England.

In this intense trailer we see a blond, long-haired Pattinson as the prince of France and leader of its army letting Henry (Chalamet) know in no uncertain terms that he wants either blood or surrender, saying at one point that the “screams” of the English soldiers “shall lull me to sleep at night.”

Chalamet is “Prince Hal”—a very young king shocked to find himself on the throne after the sudden death of his father Henry IV, played by Ben Mendelsohn. Near the end of the trailer you hear him admit what he’s dealing with: “Already I can feel the weight of this crown I wear.”

Hal (Timothée Chalamet), wayward prince and reluctant heir to the English throne, has turned his back on royal life and is living among the people. But when his tyrannical father dies, Hal is crowned King Henry V and is forced to embrace the life he had previously tried to escape. Now the young king must navigate the palace politics, chaos and war his father left behind, and the emotional strings of his past life — including his relationship with his closest friend and mentor, the aging alcoholic knight, John Falstaff (Joel Edgerton). Directed by David Michôd and co-written by Michôd and Edgerton, THE KING co-stars Sean Harris, Ben Mendelsohn, Robert Pattinson, and Lily-Rose Depp.

The King was directed by David Michôd and is based on the Shakespeare plays about both Henrys. Joel Edgerton is also credited as a screenwriter.

The King premieres on Netflix November 1.