“Thank you for your cooperation.” 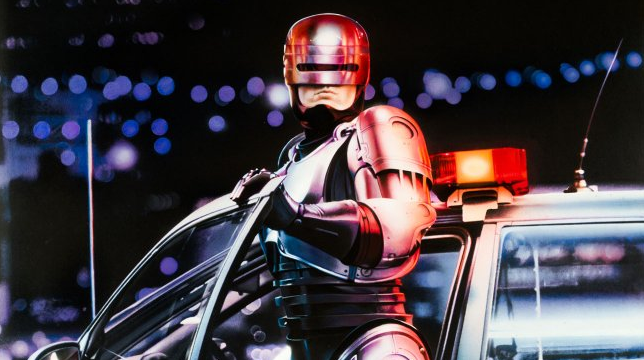 On its face, RoboCop is like many action flicks of the ’80s—ultra-violent, featuring a cartoonish “superhero” and chock full of slapstick antics.

But the film is treasured as a classic for subverting the genre—using the conceit of a killer robot cop engineered by an unscrupulous corporation to satirize American corporate greed, media inundation and brutal ideals of law and order.

That brilliant commentary from screenwriters Edward Neumeier and Michael Miner and director Paul Verhoeven was largely lost in the film’s two sequels and a poorly-received 2014 remake, but hidden in the original is truly biting social satire.

As the original RoboCop celebrates its 30th anniversary, we revisited similarly overlooked aspects of the beloved 1987 film. Here are 10 RoboCop facts you probably didn’t know.

1. The script was inspired by Blade Runner.

Screenwriter Edward Neumeier said he was inspired to create a robot cop character after watching Ridley Scott’s Blade Runner, which was about a cop who hunts down robots but potentially turned out to be a robot himself.

2. Director Paul Verhoeven threw the script in the trash when he first read it.

Dutch director Paul Verhoeven made a powerful Hollywood debut with RoboCop, which propelled him to later create iconic ’90s films Basic Instinct, Total Recall and Showgirls. But Verhoeven nearly passed on the project, throwing the script in the trash just after reading a few pages. After studio heads urged him to finish reading the script, Verhoeven noticed the satirical elements and agreed to direct.

3. Arnold Schwarzenegger was in the running to play RoboCop.

Yup, Schwarzenegger, Rutger Hauer, Tom Berenger and Armand Assante were all wanted for the titular role, but actor Peter Weller was eventually chosen. His lean runner’s frame made him a better choice to don the extremely clunky RoboCop suit, which would have looked too large with the musclebound Schwarzenegger inside.

4. The RoboCop suit was absolute torture for actor Peter Weller.

Weller suffered for his craft. His suit, which was made of fiber glass and foam rubber, insulated so much heat that Weller reportedly began dropping upwards of three pounds of water weight per day. Thankfully, crew members eventually installed an AC unit inside the suit.

30 years on, the murder of Officer Murphy, later resurrected as RoboCop, at the start of the film remains one of the most brutal killings ever seen in an ’80s action movie. The pivotal scene was actually filmed after the movie has wrapped production. Verhoeven was over budget and had to plead to studio heads to allow him to shoot the scene after the fact.

6. Peter Weller tried desperately to stay in character on set.

Weller attempted to have all cast and crew refer to him as either “Robo” or “Murphy” depending on the day, but he soon scrapped the idea after everyone made fun of him for it. Sad.

7. RoboCop drove his car around with no pants on.

The legs of RoboCop’s armored suit were so clunky that Weller couldn’t fit them inside his police car. So whenever you see RoboCop cruising around in the movie, he’s driving around in only his underwear. #Goals.

8. RoboCop was not supposed to shoot that one dude in the balls.

In the script, RoboCop was meant to shoot past the woman and nail the rapist in the side of the head. During filming, Verhoeven had the provocative idea to shoot between the woman’s legs and hit the man in the crotch. This particularly vicious kill scene is now one of the film’s most iconic moments.

9. Kurtwood Smith got the job because he looked like a Nazi.

That ’70s Show viewers may be unable to disassociate actor Kurtwood Smith from his chilling RoboCop role of Detroit crime lord Clarence Boddicker. The actor was originally up for the part of corporate shark Dick Jones, but Verhoeven, who lived in The Netherlands at the time of Nazi occupation, cast Smith for his resemblance to SS commander Heinrich Himmler.

10. The first cut was originally X-rated.

The MPAA unsurprisingly took issue with the film’s graphic violence. Verhoeven had to submit 11 cuts of the film before it was given a box office-friendly R-rating. Thankfully, a director’s cut of the film is now available through Blu-Ray.