And the Highest Paid Person In the NFL Is…Roger Goodell?

In 2014, the league commissioner made bank. 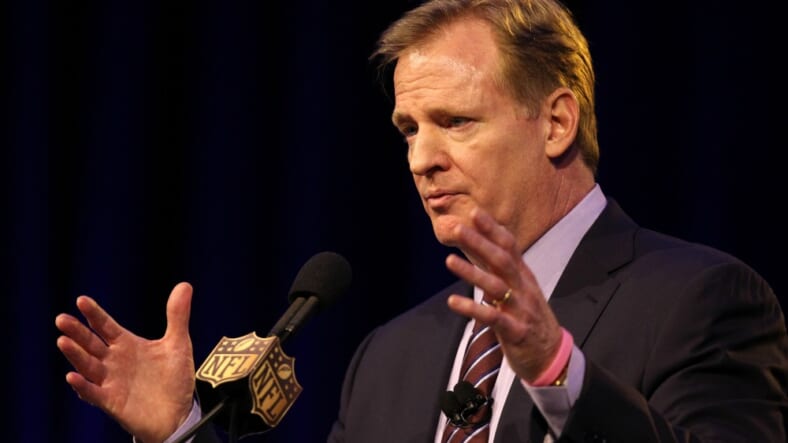 NFL Commissioner Roger Goodell is the head of a corporate behemoth that made $11 billion in revenues in 2014, so maybe no should be shocked that he earned just over $34 million that same year. Then again, 2014 was a hell of a year year for the NFL as the league was mired in scandal after scandal, all seemingly made worse by Goodell himself. So go ahead and be shocked—you wouldn’t be the only one.

The bulk of Goodell’s pay came from a $26.5 million bonus, awarded to him despite the domestic violence and head trauma-related PR hits the league took. Among them were the off-the-field troubles of Greg Hardy, Adrian Peterson and Ray Rice, all of which Goodell handled with varying degrees of ineptitude. Meanwhile, the NFL did little to quell concerns about the game’s concussion crisis while reaching an “evil” settlement with players who sued the league over its historic mishandling of the issue.

Here’s what Goodell said about 2014 at last year’s Super Bowl: “It’s been a tough year on me personally. It’s been a year of humility and learning. We obviously as an organization have gone through adversity.”If this is a year about humility, why the giant paycheck? That’s in in part because the NFL’s revenues keep growing. Goodell’s lineman-sized bonus is a reflection of the TV contracts and sponsorship cash that matters most to the team owners who pay him. Further, the bonus was set in 2013, making the missteps of 2014 somewhat irrelevant. Unlike NFL players, who play with only a fraction of their salaries guaranteed and must perform to receive the full payout, Goodell walked into 2014 knowing that his bonus was safe. He could perform his duties like the commissioner equivalent of Tim Tebow and still end the year with a gargantuan paycheck. And that’s just what he did.

Amazingly, Goodell’s pay was actually down in 2014. In 2012 he brought home $44 million and in 2013 he made $35 million. But consider that in 2015 the NFL’s highest paid player, Aaron Rodgers, made $22 million. The difference between Rodgers’ pay and Goodell’s is as a clear an indication you’ll get that this league is not so much about the game, or the players or the fans as it’s about one old rich guy helping a bunch of other old rich guys get even richer.