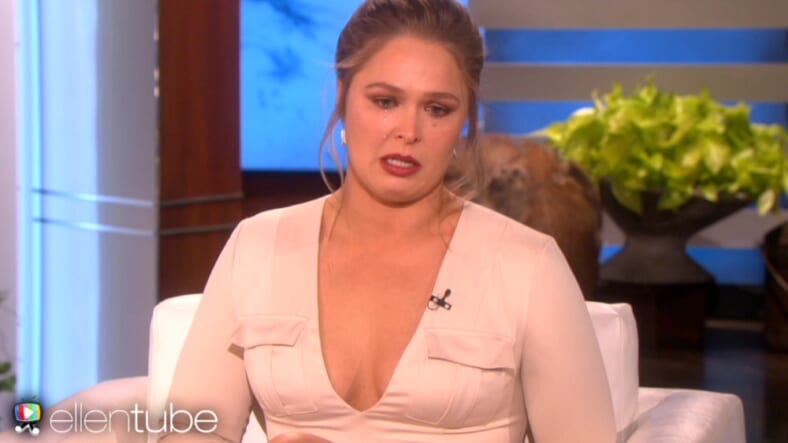 In the immediate aftermath of her shocking loss to Holly Holm, her brain still buzzing from the vicious pounding it had taken, Ronda Rousey slouched over in the corner of a doctor’s exam room and entered a dark place.

“I was like, ‘What am I anymore if I’m not this?’ And I was literally sitting there and thinking about killing myself in that exact second,” Rousey told Ellen Degeneres in a taped appearance airing today. “I’m like, ‘What do I do anymore? No one gives a shit about me anymore.’”

The thoughts, however, were fleeting. Rousey says her worst moment was soon interrupted by a much better one. “I looked up and I saw my man Travis standing there and I was just like, ‘I need to have his babies. I need to stay alive.’”

UFC heavyweight Travis Browne pulled Rousey back from the edge. “I’m not sure I would have made it without him,” she said.

The comeback is on. Opening up like this on national TV, shedding tears over suicidal thoughts—this is the kind of thing that will endear fans who were pushed away by her perceived arrogance. And it makes us all the more eager to see her fight again.

We’re not alone either. Rousey sounded emboldened about taking her next shot at Holm, who will fight Miesha Tate at UFC 196. “I want to fight Holly. I want to beat her and make everything right again,” she said.

For now, the rematch is in the hands of Holm, who must first beat Tate in a few weeks. But assuming she does, the most anticipated rematch in women’s UFC history will likely next November in a fight that will pit the undefeated Holm against Rousey, who still feels undefeated despite the loss Holm handed her last fall.

“I really do believe I’m still undefeated because being defeated is a choice,” she said. “Everyone has loses in their life, but I choose to always be undefeated.”