She allegedly has a penis, and other revelations from a handwritten lawsuit. 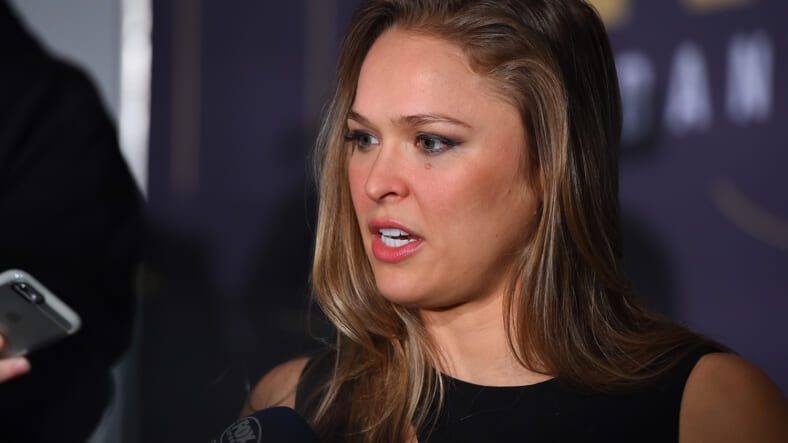 A Florida with a Ronda Rousey obsession has filed a completely whacked out restraining order against the former UFC champ claiming he knows secrets about her past and that he fears she might hurt him to keep him quiet.

The guy is clearly nuts — so much so that maybe we shouldn’t be making fun of him — but this bizarro handwritten lawsuit, uncovered by Bloody Elbow, is just too bonkers to ignore.

Let’s start with the info that plaintiff G.B. White claims to know about Rousey. First, he says Rousey is actually a man who’s “pretending to be a female in the UFC to boost ratings.” He claims to have a photo of her at a Delaware nudist colony, definitive proof that Ronda is actually a dude named Ronald. White also says he has the only copy of a sex tape Rousey made with UFC fighter Jon Jones, which shows her penis.

It only gets more bizarre from there. According to this crazed fan, Rousey has received steroids from Barry Bonds, slept with Alex Rodriguez and was named after her real father, Ron Jeremy. And in an ironic twist, White claims, that even though Rousey is a man trying to pretend to be a woman, she recently had a penis enlargement procedure in Jacksonville.

Because he knows all those fanciful “facts,” White says he’s afraid that Rousey will try to silence him. “I’m whistle blowing a major scandal here in court and fear Ronda Rousey will use her kickboxing skills and judo kick my head into submission to shut my mouth,” he writes in the suit. Hence the restraining order against Rousey.

There’s one thing he’s clearly right about: A restraining order would be appropriate here, just not the one that White is asking for.