A Ronnie James Dio Hologram is Going on a World Tour, And There’s Nothing You Can Do To Stop it

What would the late metal god think about this? 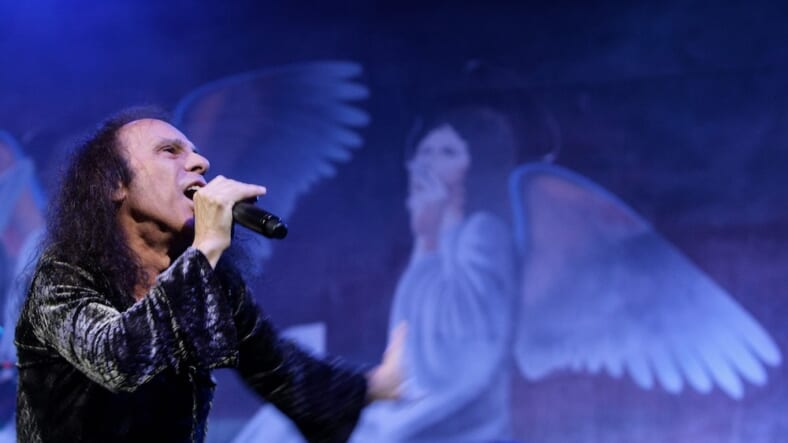 Seven years after stomach cancer sent him into the darkness for good, heavy-metal icon Ronnie James Dio is about to go on tour with a band of metal mercenaries. But since he’s is dead, Dio’s place will be taken on the stage by a hologram.

If that sounds creepy, that’s becuase it is. And there’s no better proof of that than this video of the Dio hologram playing a show earlier this year.

That performance went so well that Dio’s widow Wendy has teamed up with some crack metal musicians to put together the “Dio Returns” tour. It’s going to kick off later this year in Helsinki and then move on to dates in Asia, South America and Australia.

Backing the hologram along the way will be the live musicians in The Dio Band, which includes guitarist Craig Goldy, drummer Simon Wright, keyboardist Scott Warren and bassist Bjorn Englen. They previously played together as The Dio Disciples.

“I am sure he is giving us his blessing with this hologram project,” Wendy Dio told Rolling Stone. “It gives the fans that saw Ronnie perform an opportunity to see him again and new fans that never got to see him a chance to see him for the first time. We hope everyone will enjoy the show that we have all worked so hard to put together.”

The  hologram company Eyellusion has done the work to allow for fake Dio to perform some of his biggest hits, including “Holy Diver,” “Rainbow in the Dark,” and Black Sabbath’s “Neon Knights.”

While other artists have been portrayed in holographic form before (most notably Tupac Shakur at the 2012 Coachella festival), none have gone on a world tour.

Eyellusion tells Rolling Stone that they’re trying to change that but won’t say which artist estates they’re working with.

Fingers crossed for that Tupac and Biggie tour that never happened in real-life and would be wonderfully weird to watch in hologram form.