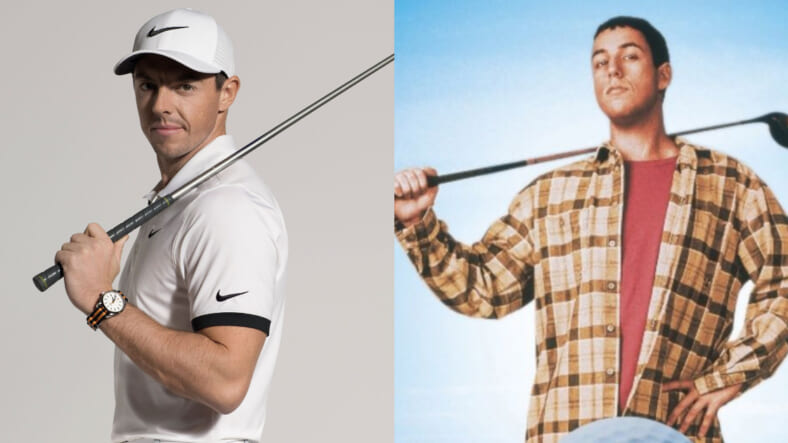 He’s just 32, so pro golfer Rory McIlroy was a kid when Adam Sandler’s comedy classic Happy Gilmore premiered in theaters 25 years ago. But the three-time PGA Tour Player of the Year is a huge fan of the movie, and he recently took to social media with a video to let Sandler know.

Celebrating the 25th anniversary of Happy Gilmore.@McIlroyRory has got a Gold Jacket and Calamity Jane on the way, @AdamSandler. pic.twitter.com/BeWXe4p4gc

McIlroy says in the video that Sandler will receive an honorary Gold Jacket and a commemorative replica of the “Calamity Jane” putter once wielded by golf legend Bobby Jones.

“I just wanna say sorry you can’t be here this week,” McIlroy says, referring to the 2021 FedEx Cup Playoffs taking place Sept. 2-5 at the East Lake Golf Club in Atlanta, “We all wish you were.”

McIlroy goes on to say, “I just want to say thanks for all the laughs you’ve given us over the years. Happy Gilmore is one of my favorite movies. You’re awesome. I’d love to meet you one day. Hopefully, we can catch up soon.”

Love you Rory. Thanks for the kind words. Look forward to playing with you all real soon. https://t.co/HhRLqvFfft

Sandler couldn’t help but respond, quote-tweeting the video and adding, “Love you Rory. Thanks for the kind words. Look forward to playing with you all real soon.”

Golf pros really do seem to love the hell out of Happy Gilmore, and to mark the quarter-century since the movie’s premiere they’ve done things like gather to try and imitate Happy’s inimitable slapshot approach to his swing.

“OG Insta golf girl” Paige Spiranac has been in on the fun as well with her own celebration of Happy’s swing, and who could complain about giving her a second look?

Sandler’s tweet responding to McIlroy brought to mind something else that’s come up a lot this year—the possibility of a Happy Gilmore 2.

In February, both Sandler and Christopher McDonald, the actor who played his nemesis, Shooter McGavin, said a sequel could definitely happen (“Yes, you can greenlight this,” Sandler responded when asked about a followup), but there hasn’t been much said about the possibility since then.

In writing that he was “looking forward to playing” with PGA pros “real soon,” was Sandler hinting that a sequel is truly in the works?

If it’s really happening, looks like Rory McIlroy is one of many golf pros who’d happily put themselves out there for a Happy Gilmore 2 cameo appearance. We’ll have to wait and see.