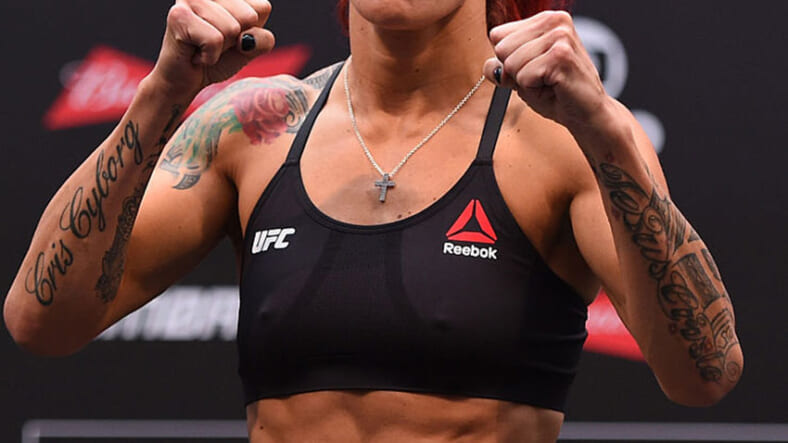 She stands 5’8″ and usually rocks a sturdy 145 pounds in fighting weight, but Brazilian MMA knockout artist Cristiane “Cyborg” Justino has dropped a few pounds just to make her UFC debut. Is she laying the groundwork to one day step up to her verbal sparring partner Ronda Rousey? We’ll see.

For now, the New York Times reports that Justino, age 30, will have her UFC debut Saturday in Brazil. She’ll be fighting at 140 pounds and is set to face Leslie Smith, whom she’s expected to easily defeat.

As for Rousey vs. Justino sometime in the future, here’s what the Times had to report regarding that tantalizing possibility:

Fighting in different promotions did not stop Rousey and Justino from engaging in a long-running war of words. Justino called Rousey and U.F.C. officials bullies, while Rousey ripped Justino for testing positive for steroids after a fight in 2011.

This is a hell of a time for Justino to step into the UFC and shake things up, as the Times article notes. The women’s division has seen the seemingly invincible Rousey finally lose to Holly Holm, then Holm in turn fell to Miesha Tate — who has never beaten Rousey in other matches.

It may be fascinating to watch “Cyborg” Justino step in and stir the pot with her serious punching power and imposing, Terminator-like vibe. Get out the popcorn — the UFC’s women’s division may have its first real heel in the Octagon Saturday night.