You have to watch the video to believe it. 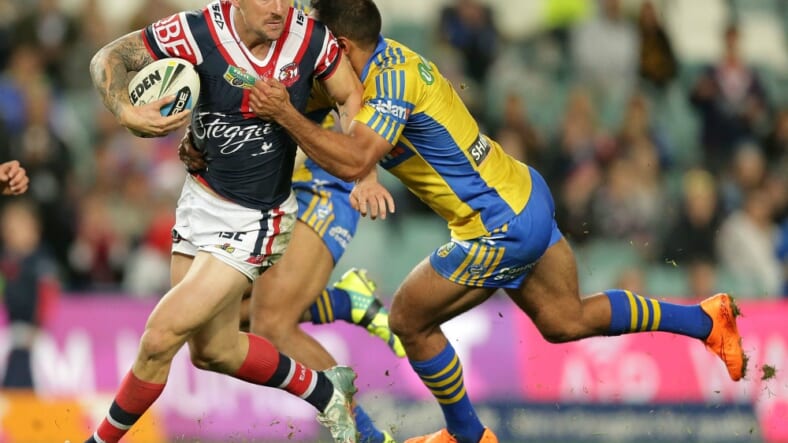 It’s not often that another country’s sports scandal becomes fodder for the American media. But it’s also not often that a star athlete is filmed humping a dog and pissing on a stranger’s couch.

Those are the misdeeds that have put 26-year-old Mitchell Pearce’s National Rugby League “career in doubt,” according to The Sydney Morning Herald. Pearce’s drunken idiocy came to light on Wednesday when an Aussie TV channel showed a video of him making a damn fool of himself at a house party. In the video, Pearce is allegedly shown aggressively hitting on to a woman who tells him she’s a lesbian. He responds by saying that he doesn’t care and would have sex with anything. “I’ll f*** that dog, I don’t give a f***, I don’t have a sexuality,” Pearce says before demonstrating what it might look like for him to f*** her dog. That’s when the woman tried to kick him out of the party and accused him of pissing on himself and her couch. The whole sordid affair was caught on video:

After that video was broadcast, Pearce’s employer, the Sydney Roosters, began an investigation into the incident. But this isn’t the first time Peace has been investigated for acting like a dirtbag: In 2014, he was arrested and then fined by his team and suspended after he was caught on camera harassing a woman in a nightclub. Taken together, it’s enough that the team is planning to strip him of his captaincy, fine him $50,000 and ban him from a pre-season trip to England.

And yet, Pearce’s shirtless dog humping isn’t even the weirdest scandal to hit the NRL in recent memory. That honor belongs to Todd Carney, who was kicked off his team in 2014 after a HIGHLY NSFW photo of him pissing in his own mouth began making its way around the Internet. What a world we live in.