“I don’t think that Neil viewed himself as an American hero.” 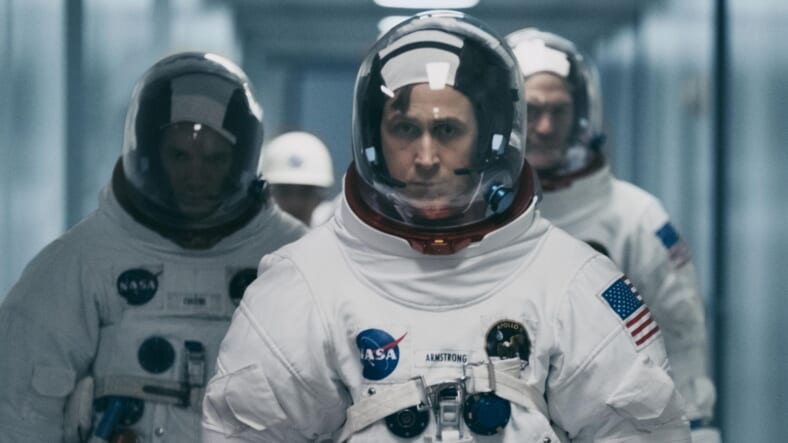 First Man is receiving high praise from critics who caught the Neil Armstrong biopic’s premiere at the Venice Film Festival this week, despite the omission of one major historical event.

Audiences couldn’t help but notice that a recreation of the iconic scene in which Armstrong plants and salutes the American flag on the moon is no where to be found.

Star Ryan Gosling, who plays Armstrong, defended director Damien Chazelle’s decision to omit the star-spangled moment when asked about it in Venice.

“I think this was widely regarded in the end as a human achievement [and] that’s how we chose to view it, ” Gosling said per the Telegraph.

“I also think Neil was extremely humble, as were many of these astronauts, and time and time again he deferred the focus from himself to the 400,000 people who made the mission possible.”

The Canadian actor added that based on his own interviews with Armstrong’s family and friends, he doesn’t believe the pioneering astronaut considered himself an American hero.

“I don’t think that Neil viewed himself as an American hero,” Gosling said. From my interviews with his family and people that knew him, it was quite the opposite. And we wanted the film to reflect Neil.”

The movie is based on the authorized biography First Man: The Life of Neil A. Armstrong and is fully backed by NASA and Armstrong’s family. Rave reviews from The Guardian, The Hollywood Reporter,  Indie Wire and other outlets are pouring in following the advance screening.

Perhaps the most promising piece of acclaim comes from Variety’s Owen Gleiberman, who deemed First Man the Saving Private Ryan of space dramas.

“First Man bears the same relation to the space dramas that have come before it that Saving Private Ryan did to previous war films, Gleiberman wrote.

“The movie redefines what space travel is — the way it lives inside our imaginations — by capturing, for the first time, what the stakes really were.”

Find out if the critics are right when First Man takes off into theaters everywhere October 12.