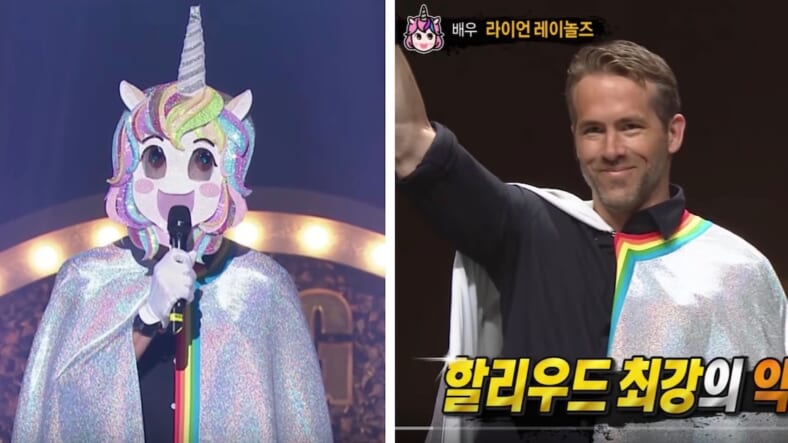 The people of South Korea were delighted to a beautiful rendition of “Tomorrow” from the musical Annie, sung by a hunky unicorn on the popular singing competition show King of Masked Singer.

Wait a minute, that’s not a hunky unicorn at all! It was actually Ryan Reynolds wearing a clever, glittery disguise. See his big reveal in the video, below.

Judging from the stunned reaction of the live audience, it is clear that Reynolds is as big of a star in East Asia as he is in the United States. Everyone is hyped for Deadpool 2, out in the U.S. on May 18th.

Just recently, the Merc with the Mouth himself appeared in the music video for Céline Dion‘s “Ashes,” her original song for the Deadpool 2 soundtrack.

We have our doubts that was Ryan Reynolds performing a sensual interpretive dance underneath that red costume.

Before that, Deadpool channeled the classic ’80s dance flick Flashdance for a movie poster.

Take your passion. And make it happen. #Deadpool pic.twitter.com/7MY7z7x6pj

If being a superhero doesn’t work out, Ryan Reynolds can always join a K-pop boy band.

That’s unlikely though. Early reactions to Deadpool 2 have been glowing, some saying it is even better than the original.