This guy needs a vacation. 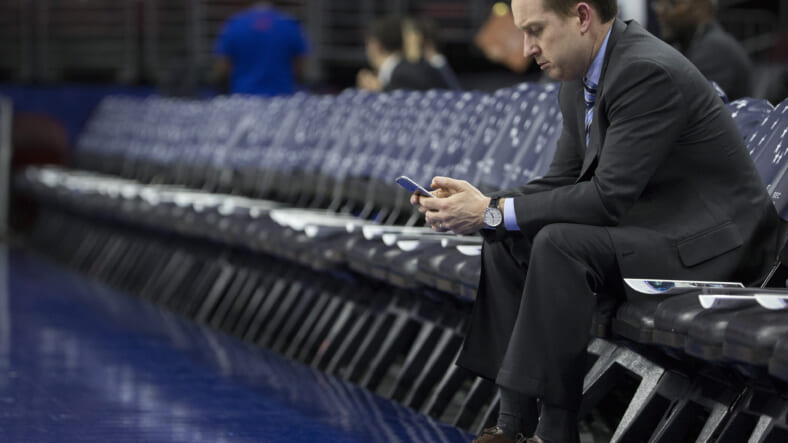 Philadelphia 76ers fans rejoice: The Sam Hinkie era is over. After three seasons of presiding over the least productive tank job in recent sports memory, Hinkie stepped down Wednesday from his position as general manager and president of basketball operations of the 76ers. “The process” will likely go with him. The name given to the Sixers rebuild that never was, “the process” was Hinkie’s plan to strip the team of NBA talent and build it back up with high draft picks, shrewd trades and payroll flexibility. Eventually, those draft picks would turn into quality NBA players and that payroll flexibility would allow spending on free agents. “The process,” if executed properly, would result in championships, Hinkie thought.

And maybe it still will. He thinks so. But three years in, Hinkie no longer felt like he was in control, he says in a rambling 13-page letter announcing his resignation. The reason? The Sixers are on the verge of hiring former Raptors GM Bryan Colangelo, hampering Hinkie’s ability to execute the plan.

“Given all the changes to our organization, I no longer have the confidence that I can make good decisions on behalf of investors in the Sixers,” he wrote in the letter.

Then things get nutty. The letter is defensive and long-winded, but most of all it’s bizarrely obtuse. The name drops come fast and furious, the technobabble is insufferable and the references read like a high school kid who stayed up all night reading Wikipedia. Just look at this shit:

Except, Lincoln never said that.

This man was a basketball GM. What the living hell is he talking about?

Three thinkers, three quotes, one paragraph. How many management books had this guy read?

All the draft picks!

And there it is, Hinkie’s delusion in one paragraph. The man believes it was a “tragedy” that he wasn’t able to make a trade for a below average NBA center and two second round picks.

The merits of “the process” not withstanding, this is nuts.