‘Manhunt: Unabomber’ Star Sam Worthington Tells Us About Playing the FBI Agent Who Took Down The Ultimate Serial Killer

“That was always paramount to our minds: This guy killed people.” 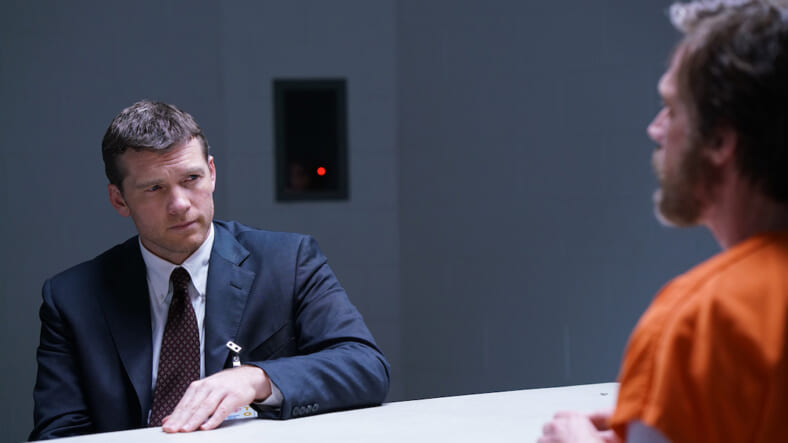 Sam Worthington isn’t interested in getting to know the real-life people on which his characters are based—at least not before he creates his own vision of them. The British-born Australian actor learned the hard way not to get too close to source material.

“I did a movie once where the guy was a real-life guy and he would hang out in my hotel lobby and at the end of my day, he’d be there and he’d say, ‘How’d it go? Did you portray me correctly?'” By correctly, Worthington surmised, the man meant flatteringly. But Worthington’s loyalty is always to the character, whether the inspiration for that character likes it or not.

That’s a principle he took to Manhunt: Unabomber, a Discovery Channel series premiering on August 1 in which he plays FBI profiler Jim Fitzgerald, the real-life agent who helped solve the Unabomber case in 1996. When Worthington finally did meet Fitzgerald, who served as a consulting producer on the series, he was straightforward: “I said, ‘I’m going to portray the good side and the bad side, so be prepared.’ But I think he’s happy the story is being told.”

Worthington has become a master storyteller since his career’s surreal launch in Hollywood, when he landed the lead in James Cameron’s 2009 blockbuster, Avatar, which became the world’s highest-grossing movie in history. Manhunt marks an opportunity to flex different muscles, the chance to develop a character over the course of a television series and tell the untold side of a famous story.

In 1996, the infamous Unabomber case came to a close after Ted Kaczynski, a Harvard graduate, was turned in by his brother. Since 1978, Kaczynski (played in the series by British actor Paul Bettany) had mailed a series of bombs that killed three people and wounded 23 others, targeting airlines and universities (hence the moniker). Although the case was one of the most famous of the 20th century, Manhunt unveils details that were hidden from the public for decades.

To develop the character, Worthington immersed himself in books, interviews, and audiotapes by Fitzgerald. “The script helped tremendously—that’s your bible to getting in and understanding,” Worthington explains.

“When I met [Fitzgerald], I thought, ‘I’ve already cemented this and hopefully you like the approach.'” The actor believes that the risk of meeting real-life characters is that they can romanticize the past and their actions. “There’s so much material a person can give you, but this was 20 years ago and you might not get to the nuts and bolts that can help you,” he says. “You’re going to have a glorified approach, and the negative aspects will sweep away.”

Instead, Worthington’s goal is to find truth in his work rather than a rose- tinted version. “The truth is always an elusive thing you try to capture,” he says. “That’s why some movies work and some don’t. You either found the truth or you were faking.”

Manhunt also presented a new challenge to Worthington, whose career so far has focused on the big screen: the faster pace of a TV drama. “You’re doing the equivalent of four films back-to-back, and I found that very interesting. The speed of the medium is insane, and it was a whole different set of skills. I learned here that speed is your friend.”

In Manhunt, Worthington was presented with a unique opportunity, because while the Unabomber case was one of the most notorious domestic terror incidents in FBI history, Fitzgerald’s role was unsung for many years. Going in, the actor had no idea that Fitzgerald played such a large part in solving it. Because of the grisly nature of the crimes, Worthington felt an added obligation to get the story right.

“I do believe you have a responsibility to the victims, and that was always paramount to our minds: This guy killed people.”