How about some fried chicken? 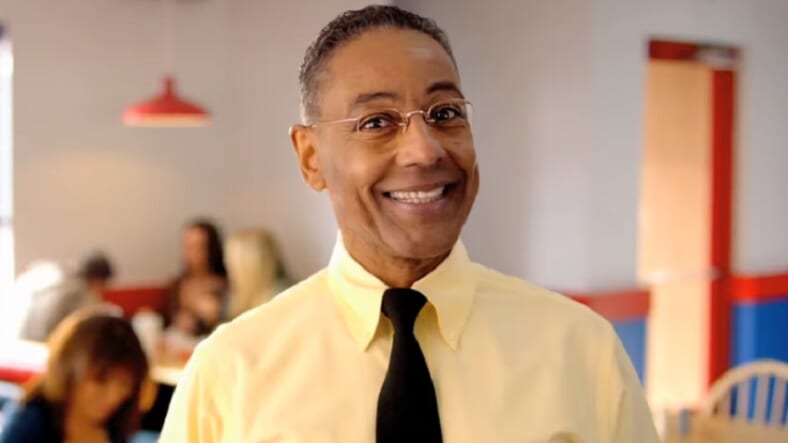 I’ve written an official tie-in book for Better Call Saul and (may) even have another on the way, but that doesn’t mean I know for sure what’s up with this new commercial featuring Breaking Bad meth kingpin Gus Fring. I don’t have that kind of inside information. Hell, even series star Bob Odenkirk has said he didn’t know if Giancarlo Esposito’s cold and calculating Fring would be joining the show.

Still, there it is, uploaded January 10th, a slickly-made commercial for Fring’s Las Pollos Hermanos fried chicken chain, which was a front for the character’s drug trafficking empire in Breaking Bad. It strongly suggests that the rumors floating around on fan discussion forums since the mysterious end of season 2 may be true: Gus is back from the dead, sort of.

“Sort of” because of course, Better Call Saul is essentially a prequel detailing how sketchy legal eagle Jimmy McGill became full-on “Criminal. Lawyer.” Saul Goodman, and Goodman was the character who later put Fring in touch with Walter White in Breaking Bad.

Fring was rumored to be joining the show after fixer Mike Ehrmantraut (Jonathan Banks) was stopped in his effort to take out Hector Salamanca by a note on his car which simply read, “DON’T.” That rumor was solidified when fans noticed that the first letters of the episode titles for the show’s second season spelled out “FRINGSBACK” — a puzzle that showrunners Peter Gould and Vince Gilligan confirmed was real to Vanity Fair without actually saying Esposito would be seen in season three.

After all, as Gilligan noted when he spoke to VF, “This is a character who is very circumspect. Very cautious. He does not reveal himself easily.”

So is Gus Fring back? Looks like the answer is a definite yes. Will we see him right off the bat in the first episode of Better Call Saul, season 3?

Apparently we’ll just have to wait and see.