Two Comedians Have a Secret Cameo as the Voice of BB-8 in ‘Star Wars: The Force Awakens’

You’ll never guess which ‘SNL’ and ‘Parks and Recreation’ stars were hiding in plain sight. 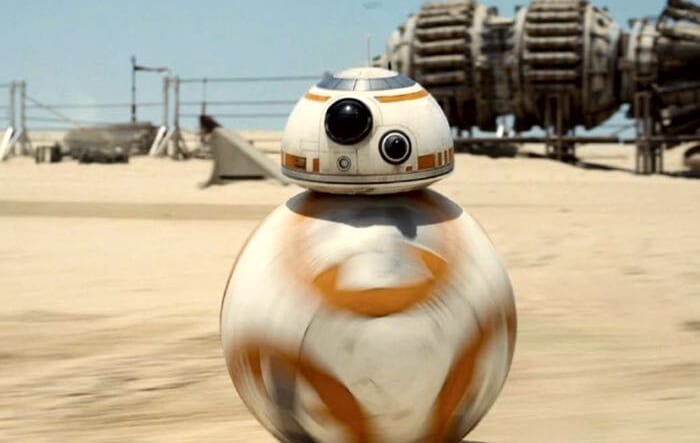 We’ve already told you Star Wars: The Force Awakens is every bit the miraculous sequel we’ve been waiting for, but we probably didn’t emphasize enough that this is largely thanks to BB-8, a quirky, wide-eyed bouncing ball and the spiritual cousin of R2D2 in the saga’s latest installment. The droid, Poe Dameron’s trusted sidekick, is central to bringing newcomers Finn and Rey together with Luke, Han and Leia. The movie simply wouldn’t exist without him.

But wait…who’s actually ‘playing’ this little droid? R2D2, operated by Kenny Baker, was technically voiced by sound designer Benny Burtt, his signature bleeps and bloops created using an ARP 2600 analog synthesizer. Earlier this year, JJ Abrams revealed that BB-8 was actually a real machine rather than CGI, built and operated by Neal Scanlan, but he didn’t mention who would technically ‘voice’ the the little droid.

So who’s behind BB-8’s adorable metallic warble? None other than longtime SNL player and comedic mainstay Bill Hader.

Drew McWeeny at HitFix, who is way smarter than anyone else who has published anything about The Force Awakens on the internet, sat through the closing credits of the film and stumbled across a delicious little gem: Hader was listed as a “BB-8 Vocal Consultant.” Here’s how the Trainwreck star described his role as ‘consultant’ in the film to McWeeny:

JJ f**king around with this sound effects app on his iPad that was attached to a talk box operated by me. It looked ridiculous but it made BB-8’s voice. At first I tried doing a voice, but we all agreed it sounded too human.

It gets way better. Hader isn’t the only “vocal consultant” for the little droid in the closing credits:

Ben Schwartz, known to many for his stellar work as Jean-Ralphio on Parks and Recreation, was also credited as a “BB-8 Vocal Consultant,” so I guess they both contributed to the final version of what we hear onscreen. I saw Schwartz at the premiere but didn’t get to talk to him about it. Still… what an amazing combination to help bring this lovable new character to life.

Jean-Ralphio Saperstein. You know, this guy:

BB-8 is voiced by Stefon and Jean-Ralphio. Mother of God.